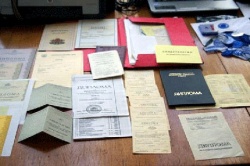 Some of the fake diplomas that police say were produced by the two young women. Photo by the Ministry of Interior.

Both arrested women are aged 23, one of them being a college student with a record for theft, and the other a friend of hers.

The two are believed to have produced fake high schoold diplomas, as well as bachelor's and master's diplomas from 3 large Bulgarian university.

They advertised their products in a site on the net, and they sold them in the range of BGN 1900-2400.

The two delivered the diplomas in person or via a courier service.

They also had the equipment needed for the designing and printing of the fake diplomas, which police promptly seized.

The investigation is still under way and formal charges are expected to be filed against the detainees.