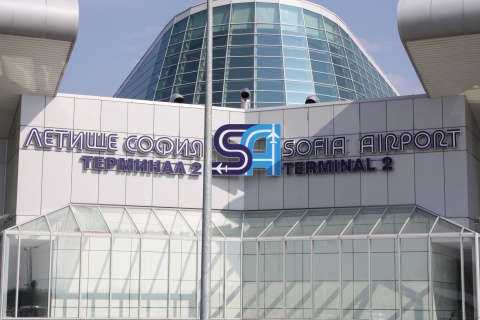 Terminal 2 of the Sofia International Airport which still remains technically known as "Vrazhdebna" - the name of the respective Sofia quarter - which means "Hostile". Photo by M3 Communications Group, Inc

An initiative committee has launched a campaign to name Bulgaria's largest international airport, the Sofia Airport, after the inventor of the computer John Atanasoff, an American of Bulgarian origin, announced Bulgarian PR expert Maxim Behar, who is one of the authors of the idea.

The Sofia International Airport is located in the Vrazhdebna (meaning "Hostile") quarter in the Bulgarian capital, and is technically known with the same name.

In an interview published by Novinite.com (Sofia News Agency) and Novinite.bg Behar explained the idea that he got together with former Foreign Minister of Bulgaria Solomon Passy and long-time radio manager Petar Punchev to rename Sofia Airport in order to help improve Bulgaria's image and provoke greater international interests towards the country on part of foreign investors and tourists.

The three Bulgarian experts intend to gather a following of a large number of public figures in support of their initiative.

"A couple of weeks ago I got together with my friends Solomon Passy and Petar Punchev, and we are going to launch a campaign to rename the Sofia International Airport because this airport must be called either John Atanasoff (the American of Bulgarian origin who invented the computer – editor's note), or St. Cyril and St. Methodius (the 9th century scholars who invented the first Slavic script – editor's note). These are the two options that we considered. I personally believe that John Atanasoff is more suitable," Maxim Behar explained.

"Up until recently, Bulgaria was popular as the home country of the most talented hackers but some other facts have been largely forgotten – such as the fact that Bulgaria was the first communist nation to produce personal computers, or that John Atanasoff, a Bulgarian has been recognized as the inventor of the computer. This very computer is now being held by all humankind in a pocket or a mobile phone," stated Bulgaria's former Foreign Minister and President of the Atlantic Club of Bulgaria, Solomon Passy.

As an example of the need to take specific measures to attract international interest towards Bulgaria, PR expert Maxim Behar quoted a foreign view of the country.

"There was this very interesting article in The Financial Times whose author wrote it after several days in Bulgaria. It started like that: "This is most peculiar country that I have seen. It has great beaches and awesome people. But I land on an airport that is called "Vrazhdebna" ("Hostile"), and then you go to the most high-class quarter that is called "Hladilnika" ("The Fridge")...", Behar cited.

"It has been my conviction that, not unlike any other ancient nation, the Bulgarian nation too has world-class personalities that it can be proud of. I have been really annoyed by the "hostile", impersonal name of the Sofia Airport which is the gateway to Bulgaria for millions of people, most of whom know nothing or almost nothing about our country," stated in turn popular Bulgarian radio manager Petar Punchev.

"The times today are so competitive for both people and nations that you be must be recognizable in order to find your place under the sun. Both the Holy Brothers St. Cyril and St. Methodius, and the inventor of the computer John Atanasoff hit the bull's eye! When I first started the campaign to rename the Sofia Airport, and we asked thousands of people, these were the names we heard most often. It is time to pick one of them and to give a blessing to the airport with its new name," he added.

"Just imagine how each one of the tens of thousands of people landing at Sofia Airport every day will ask themselves, "John Atanasoff? Who is that? Oh, the inventor of the computer! I had no idea!" Of course, we Bulgarians love and cherish the Cyrillic alphabet, the Slavic script, and St. Cyril and St. Methodius will bring the foreigns back to history. That's nice, too, of course. But the combination of John Atanasoff's internationally sounding name – John and Atanasov at the same time, and the fact the foundation of the contemporary world started with him is truly unique," Bulgarian PR expert Maxim Behar stated further.

He pointed out the example of the recent decision of the authorities in the Czech Republic to rename the airport in Prague after Vaclav Havel, the former Czech President, a dissident from the communist period, and a popular author, who died recently.

"The Czech government has decided to rename it after this great man who changed the Czech Republic for the better, and a great writer and playwright. But we have John Atanasoff which sounds 100 times more international, and he invented something that the entire humankind has benefited from," Behar underscored.

„If we make such steps, all of us, the thousands of people who are interested in Bulgaria having a better image and branding, I thing that we will be able to achieve this goal," he added.

The largest Bulgarian English-language media Novinite.com (Sofia News Agency) and the Bulgarian-language website Novinite.bg are joining in the initiative to name the Sofia International Airport after John Atanasoff! We invite our readers from Bulgaria and around the world to support it as well!