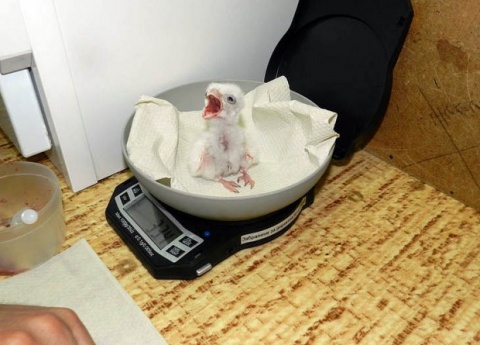 The first saker falcon to be hatched in Bulgaria since 1998 - in the Green Balkans rescue center in Stara Zagora. Photo by Zeleni Balkani

The Bulgarian NGO Zeleni Balkani ("Green Balkans") and its wildlife rescue center have been successful in breeding saker falcons, which are extinct in the wild in Bulgaria.

A young saker falcon has hatched in the Zeleni Balkani rescue center; its parents come from Slovakia, and were transported to Bulgaria earlier this year as part of a project entitled "Saker Falcon in Bulgaria – Research and Preservation", which aims at reintroducing the bird into the wild, the NGO explained.

The newly-hatched is the first saker falcon in Bulgaria in 15 years, and it was the only falcon to be hatched in an incubator out of several eggs. The environmental experts had to resort to the use of an incubator after the male falcon started to exhibit "abnormal behavior", the NGO said.

The last nest of a saker falcon in Bulgaria was registered in 1998, and since then the species has been considered extinct on the country's territory.