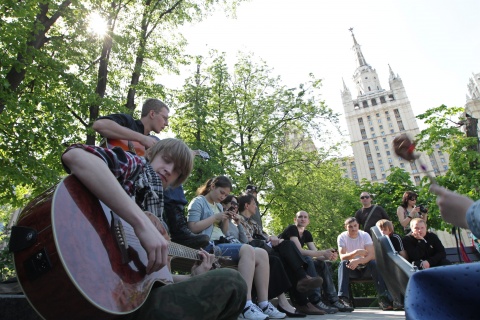 Russian young people dispersed from their camp `OccupyAbai` play a guitar and talk to each other trying to find a new site for their camp in the center of Moscow, Russia, 16 May 2012. EPA/BGNES

Anti-Putin activists have vowed to continue their round-the-clock street protests after police broke up a downtown Moscow Occupy-type camp in a dawn raid on Wednesday.

"I'm expecting more people to join us later today," said protest leader Ilya Yashin, as some several dozen activists gathered in a square next to a landmark neo-classical Stalin-era tower a short walk from the U.S. embassy. "People will spend the night here," he added, as quoted by RIA Novosti.

Yashin later proposed in a Twitter post that activists hold a meeting at the square later on Wednesday to decide "what to do next."

Riot police dismantled a previous camp in the Russian capital's fashionable Chistye Prudy neighborhood earlier on Wednesday, briefly detaining over 20 people. Police had earlier pledged to give activists until midday to leave voluntarily.

The move came after a court ruled on Tuesday in favor of complaints by local residents and obliged police to "take action to put a halt to disorder" at the camp, which was set up in the wake of clashes between demonstrators and police during a protest against the May 7 inauguration of Russian President Vladimir Putin for a third term.

And on Wednesday afternoon, tired-looking activists soaked up the attention of film crews and journalists at the new Kudrinskaya Square site, as police looked on but made no move to intervene, other than warning the protesters to stay off the grass.

The authorities accused activists of causing some USD 650 000 worth of damage to greenery during their week-long stay at the Chystye Prudy camp, an accusation dismissed by protest leaders.

The Chistye Prudy camp was attended by up to 3,000 protesters at its peak and attracted activists of a variety of political persuasions, from anarchists to nationalists, all apparently united only by their opposition to Putin.

Around a dozen masked nationalists acted as camp security and followed the protest to its new location on Wednesday.

"I can't say I share their political ideologies," Yashin said as he stood by a fountain. "But there are people here with very different political views. We want to unite all the opposition to Putin."

Communist Party leader Gennady Zyuganov, who came a distant second to Putin at the March presidential polls, voiced his support for the protesters.

"The protests are completely justified," he said at a news conference in Moscow on Wednesday. "There is no freedom of speech, no freedom of assembly...what then is the point of the Constitution?"

"But you can't shut the mouths of the whole country," he went on. "The situation will intensify in the fall - this is unavoidable."

Russian opposition parliamentarian Ilya Ponomaryov told journalists on Wednesday that protesters would simply roam around the city if moved on again by police.

"No one can forbid citizens to sit on benches, sing songs and talk about life," he said.

Opposition figureheads Sergei Udaltsov and Alexei Navalny are currently serving 15 days in jail for their part in the protests over Putin's inauguration. Udaltsov was earlier hospitalized after going on hunger strike to protest his treatment.

Both men and are due to be released on May 25. But well-connected television presenter and opposition figurehead Ksenia Sobchak said last week, quoting Kremlin sources, that the authorities were planning to jail them for two years over violence at a rally on the eve of Putin's inauguration.

Putin was president of Russia from 2000 to 2008, before being forced to step down by the Constitution. His opponents fear his return to the Kremlin will usher in a period of economic stagnation and accuse him of corruption and a crackdown on political freedoms.