Man Sets Himself On Fire Outside Norway Killer's Trial Court 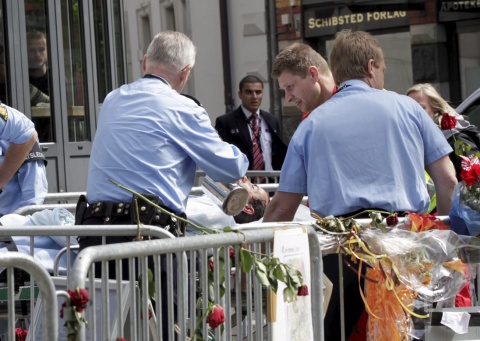 Medics attend to a man who set fire to himself outside the courthouse in Oslo, Norway, 15 May 2012, where the trial against terror- and murder suspect Anders Behring Breivik is taking place. Photo by BGNES

An unidentified man set himself on fire Tuesday outside the court in Oslo where Anders Breivik is being tried for killing 77 people in a terror attack in July 2011.

The man suffered serious burn injuries and was taken to Oslo University Hospital, according to reports of international news agencies.

Video footage posted online shows the man running toward the court building with his hat and jacket on fire.

Police officers then pull off his clothing and try to put out the flames as he lies on the ground.

According to eyewitness reports cited by Norwegian TV channel TV2, the man was shouting "Shoot me! Shoot me!" in Swedish as he reached the court security, before setting himself alight.

The incident took place at about 1:45 p.m. local time.

The motive for the man's actions has not been established conclusively and local police have remained evasive about the incident's connection to the trial against Breivik.

A few days ago, the brother of one of Breivik's victims hurled a shoe at the 33-year-old extremist, shouting "You killer, go to hell.'

The shoe hit one of Breivik's defence lawyers but she was not hurt.

Apart from the two incidents, the trial against the self-confessed mass killer has so far gone without disturbances.

The proceedings are scheduled to run until end-June.