Greece to Go to Polls after Failed Cabinet Talks 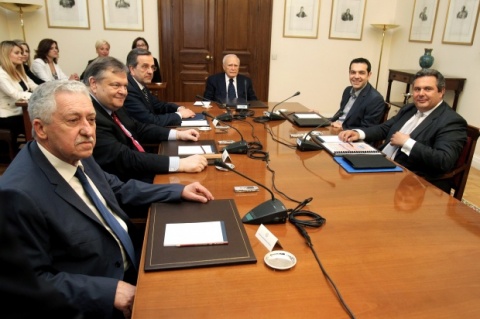 The negotiations to form a new Greek cabinet have failed for good and the country is set to go to the polls again.

The final round of talks between the leaders of the parties which won Parliamentary seats at the May 6 elections broke up without a deal Tuesday, BBC reports.

The Greek President, Karolos Papoulias, will appoint a caretaker government on Wednesday.

From the other two parties that made the cut, the KKE CommunistsCommunistsparty declined participation, while the far-right, nationalist Golden Dawn was not invited.

The leader of the Socialist PASOK party, Evangelos Venizelos, said that new general elections must now take place since coalition talks failed to produce agreement on a new government.

The Presidential Office has further confirmed the news.

A majority of Greek voters backed anti-austerity parties in the elections earlier this month. As well as SYRIZA, these include the Democratic Left, the KKE (Communists) and the far-right Golden Dawn.

New Democracy and PASOK both agree to austerity measures in return for the last EU/IMF EUR 130 B bailout, but suffered at last weekend's general elections polls. SYRIZA, which came second, insists any new government must cancel the measures.

Recent opinion polls suggest SYRIZA's support has increased since May 6, and it could come first in any new election.

One poll commissioned by the Eleftheros Typos newspaper and published on Monday showed 20.5% of support for SYRIZA, compared to 19.4% for New Democracy and 11.8% for PASOK.

Leading European figures, including European Commission head Jose Manuel Barroso, have warned that Greece must respect the terms of the bailout deal if it wants to remain in the Eurozone.

The new elections will be scheduled for next month, most likely for June 17.

The uncertainty has alarmed Greece's international creditors, who insist the country must keep to the terms of the bailout deal if it is to continue receiving funds and avoid bankruptcy.

Greece's Central Bank and the Finance Ministry are working on an emergency plan to prevent bankruptcy if the bailout loans come to a halt.

Leading news agencies report that according to analysts, funds needed to pay wages, retirement pensions, welfare and others top EUR 4 B a month and the Greek State only has funding for them until the end of June.