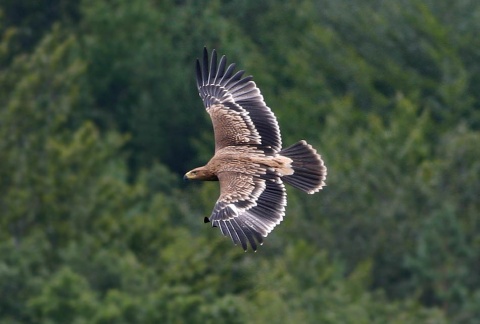 The first young eastern imperial eagles in Bulgaria for 2012 have hatched in the wild Sakar and Strandzha Mountains in Bulgaria's south-eastern corner.

In the last few days three of the monitored imperial eagle couples have hatched out their young, announced the Bulgarian Society for the Protection of Birds (BSPB).

Breeding in southeastern Europe through Central Asia, the eastern imperial eagle is classified as a vulnerable species worldwide.

BSPB monitors the couples breeding in Bulgaria, which were recently counted to number 23, which is a record since systematic observation of the species began in Bulgaria.

One of the couples that have hatched out their eggs have two eaglets, while the other two couples have at least one, but new little birds could emerge from their nests, says the Society.

The other 20 couples are at present still sitting on their eggs, according to the bird protection organization.

The Society further adds that 2 of the recently discovered couples are newly formed and have occupied nests especially built by the organization for imperial eagles.

According to BSPB, this fact strengthens hopes that efforts for the promotion of the species come to fruition.