Diplomats Begin 2nd Edition of Bulgarian Business Tour in US 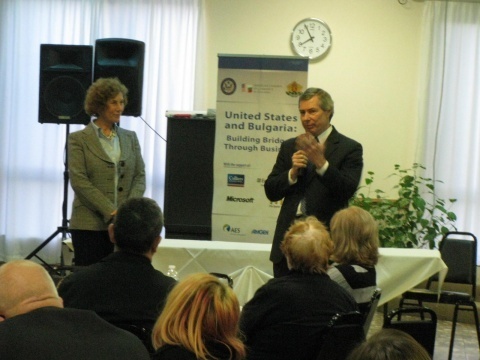 Ambassadors Warlick and Poptodorova at a meeting with the Bulgarian Community at St. Sophia Church in Chicago during their 2011 US tour. Photo by Simeon Gasparov for Eurochicago

The Bulgarian Ambassador to the US, Elena Poptodorova and the US Ambassador in Sofia, James Warlick, are starting Monday their second diplomatic tour across the US in an effort to attract American investors to Bulgaria.

The Ambassadors' Business Road Show will tour the United States from May 14-18, 2012, the US Embassy in Sofia informs in an official press release. With stops in Austin, Los Angeles, Seattle, and Silicon Valley, the Road Show aims to further increase trade and investment between the two countries.

In 2011, the Ambassadors visited Chicago, Houston, Phoenix, and San Francisco.

According to the American diplomatic mission, in a historic moment for U.S. - Bulgaria trade relations, President of the Republic of Bulgaria Rosen Plevneliev will lead the program in Seattle, and Silicon Valley. The President's goal is to promote partnerships in Bulgaria's innovative sectors such as IT, energy efficiency and biotech. Bulgaria is currently in the planning stages of a project to create a business incubator and technology park in Sofia. The visit will be a chance to understand the best practices of U.S. technology parks and to build relationships that can contribute to the successful execution of the project.

Ambassador Warlick is quoted saying: "The time is now for American companies to form partnerships in Bulgaria's developing innovative sectors. Alongside President Plevneliev, I'm looking forward to explaining to leading American companies why Bulgaria is a great destination for US business."

Each stop on the Road Show will have its own unique focus, the US Embassy further notes.

In Austin, the University of Texas is in discussions to bring its Master in Technology Management program to Bulgaria. The stop will have an infrastructure and IT focus and will feature a seminar highlighting the development of the connection between universities and business in Bulgaria as well as the creation of the business incubator/tech park.

In Los Angeles, the energy efficiency sector will be in the limelight as the Road Show highlights the support of the European Bank for Reconstruction and Development to improve the efficiency of Bulgaria's existing housing stock as well as commercial and public buildings.

In Seattle, some of America's most innovative companies will have the chance to meet with President Plevneliev. Expected themes will include Bulgaria's budding IT cluster, e-government initiatives, EU and EBRD funded projects and the business incubator/tech park project.

In Silicon Valley, the Delegation will visit some of the leading centers of innovation as well as some of America's most successful companies to bring back ideas and partnerships to Bulgaria for the business incubator/tech park.

The principal organizers of the Business Road Show are the U.S. Commercial Service offices in Sofia, Austin, Los Angeles, Seattle, and Silicon Valley; the American Chamber of Commerce in Bulgaria; and the Bulgarian Embassy in Washington, DC and the Bulgarian Consulate in Los Angeles.