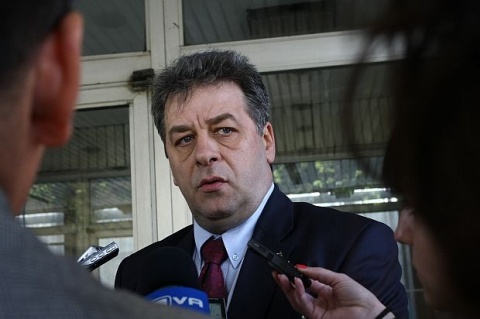 The Chief of the Sofia Directorate of the Interior Ministry, Commissar Valery Yordanov, informed that a car theft gang has been busted in the capital and the nearby city of Pernik. Photo by Sofia Photo Agency

Police in the Bulgarian capital Sofia and in the western city of Pernik have arrested seven individuals, most of whom have extensive rap sheets, in a special police operation codenamed "The Veterans."

The Chief of the Sofia Directorate of the Interior Ministry, Commissar Valery Yordanov, informed Sunday that the gang dealt with the theft and resale of automobiles after forging their registration.

The organized crime group had three main types of people – those who ordered the theft; those who perpetrated it, and the so-called "craftsmen," who remodeled the cars and forged the registration so that they could not be recognized and repossessed.

8 stolen automobiles have been found during the arrest and 3 other thefts are still been investigated. The criminals took mostly popular and not expensive models with the goal of quickly finding a buyer.

Police have acted after receiving a tipoff.

The probe revealed that about 40-50 stolen cars had been fixed in the last six months in a village near Sofia. The gang had been purchasing totaled vehicles to use their registration for the stolen ones.

The detainees are held behind bars for 72 hours before facing the judge. They have been indicted for organized crime to commit car theft.

During the bust, one of "The Veterans" had said: "I am done with this. I am retiring. I am sick and tired of you constantly catching me," according to Commissar Yordanov, who explained some of the buyers will have to return the cars.

He pointed out that these buyers should have suspected something wrong in purchasing a car three times cheaper than the market price.