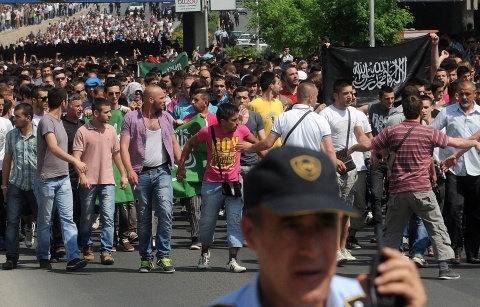 A large group of people staged a protest on Friday 4 May, 2012 in Skopje; the ethnic Albanian youth protested the police claim that the perpetrators of the five murders near Smilkovci Lake are Islamic terrorists. EPA/BGNES

Most windows on the second of the Macedonian government's building in Skopje have been broken by protesting ethnic Albanians, according to Macedonian media.

A bus stop in front of the government's building has been vandalized, according to mkd.mk. The protesters are said to be throwing stones at the building.

Some 10 000 people gathered in Skopje on Friday to protest against the arrests of 20 ethnic Albanians around the capital that followed the murder of five men near Skopje on April 12.

The protest was launched after the Friday prayer in Skopje. Similar protests are taking place in other Macedonian cities.

The bodies of Filip Slavkovski, Aleksandar Nakjevski, Cvetanco Acevski and Kire Trickovski, all aged between 18 and 20, were discovered on April 12 near Zelezarsko Ezero on the northern outskirts of the capital Skopje. The body of 45-year-old Borce Stevkovski was also found nearby.

Macedonian authorities stated "radical Islamists" were responsible for the murders.