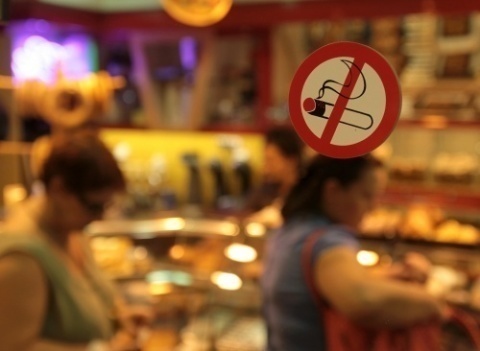 Tobacco-addicted Bulgarians will protest on Sunday against the ban on smoking in all enclosed public spaces, due to be enforced as of June 1.

The rally, to be held on Alexander Batenberg square, will be spearheaded by popular movie stars Andrey Slabakov and Asen Blatechki among others.

Organizers claim that the initiative aims to raise awareness of smokers' rights and the difficulties that small and medium-sized enterprises will face once the ban is introduced in cafes, bars and restaurants, regardless of size.

Slabakov, a passionate chain-smoker, argues that the ban on smoking was approved not without the assistance and financial support of drug cartels.

"Humans are not angels. Once you uproot one vice, there is more free room for another one to take root. I am absolutely sure that drug cartels are pouring money for this ban to be introduced. Have you noticed that over the last 15 years talk about drugs is not so popular, whole cigarettes have gained the reputation of the biggest scourge of mankind?," Slabakov fumed in an interview on TV 7.

Meanwhile experts have warned that Bulgaria's organized crime will see their old favorite - illegal cigarette sales - boom after smoking is banned in all enclosed public spaces.

Tihomir Bezlov, an expert from the Center for the Study of Democracy (CSD), pointed out that taxes from tobacco products account for 10% of budget revenues (compared with about 1.4% in many other EU countries), which makes the country's finances highly dependent on that market.

A report by CSD presented last month says that when excise taxes went up cigarettes in Bulgaria became, in relative terms, the most expensive in the EU.

The illegal market accounts for 30% to 40% of all cigarettes sold, and is worth probably around EUR 250 M, the report says. It estimates that about 500,000 packs of illegal cigarettes are sold every day in Bulgaria.

The full smoking ban in closed public spaces was to be enforced in 2010, but was postponed by the government with the argument that it might harm the country's tourism.