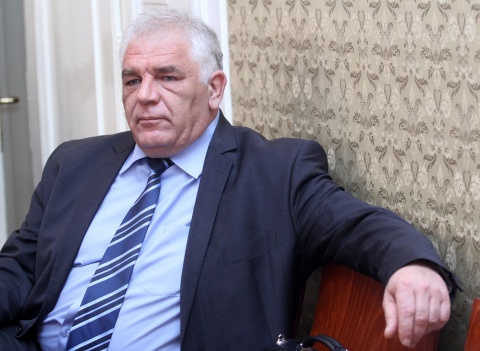 Customs Agency chief Vanyo Tanov has boasted that the institution is growing modernized. Photo by BGNES

Customs Agency chief Vanyo Tanov has said that the recent bribery scandal at the institution will not lead to dismissals at this stage.

In a Thursday interview for the morning broadcast of private TV station bTV, Tanov made clear that he was not worried by the results of the special police operation and refused to take the blame for the corrupt officials.

He explained that he had dismissed 114 bribery-prone officials in three years.

In a special police operation held on the evening of May 2, a total of 32 customs officials were caught red-handed as they were distributing the daily 'earnings'.

Charges were only pressed against eight customs officials.

After the special police operation, which had been prepared for three months, Interior Minister Tsvetan Tsvetanov stated that Tanov had not been informed about it.

The Customs Agency chief, however, said he had initiated disciplinary action to find out whether the directors of the Kapitan Andreevo border crossing point had remained indifferent to the corrupt practices.

Tanov vowed that officials found responsible for the offence would go.

The Customs Agency Director confessed that there were corrupt practices at the Kalotina and Svilengrad customs offices.

He explained that many customs officials had failed the loyalty test (a 120-point questionnaire) and vowed that these people would gradually be dismissed.

Tanov said that the Customs Agency had a new outlook largely thanks to the highly intelligent and highly qualified new employees.

"Since the beginning of 2012, we have tested 5900 people, of which 118 have been appointed. These people are the best in the country. They have passed all possible tests in the sphere," the Customs Agency chief added.

Asked to comment on the disappearance of the notorious mobster pair known as the "Galevi brothers", he said that there was "something rotten" about it.

Angel Hristov and Plamen Galev aka the "Galevi brothers" disappeared after the Bulgarian Supreme Court of Cassation (VKS) confirmed their organized crime sentences last week, and the two were supposed to go  to jail for 5 and 4 years, respectively.

The authorities issued nationwide search warrants for Hristov and Galev.

In his Thursday interview, Tanov suggested that the case of the "Galevi brothers" involved some sort of backstage arrangements.

"There is something rotten about it. I cannot imagine any other country where they would let you serve your term at home," Tanov stated.

They were said to have flown to Africa from neighboring Greece.

According to unconfirmed reports, the two settled in

It has been said that the two settled in the South Africa, from where they cannot be extradited.