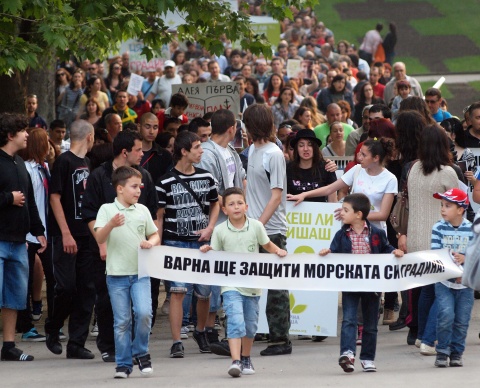 Hundreds of Bulgarians protested in Varna against the construction and development plans of the Varna-based group TIM for the city's landmark Sea Garden. Photo by BGNES

Hundreds of residents of the Bulgarian Black Sea city of Varna have rallied to protest against construction plans of a powerful murky business group for the city's Sea Garden.

This is the second protest rally, after a protest in April, against the development plans of "Holding Varna", a company related to locally all-powerful shady TIM consortium, which include the demolition of the vast park's seaside alley to erect a number of business buildings.

The protesters had young children carry banners, reading, "Varna Will Protect Its Sea Garden", while expressing outrage at what they saw as a giving way to shady business interests on the part of Varna Municipality headed by mayor Kiril Yordanov.

They recalled that end of March the Varna Municipality made a revision of the construction and development plan of the city, officially making it allowed to carry out construction in the Sea Garden, Varna's most famous landmark.

The new plans allowing Holding Varna to proceed with its construction projects will technically downsize the Sea Garden by 62%, the protesters complained.