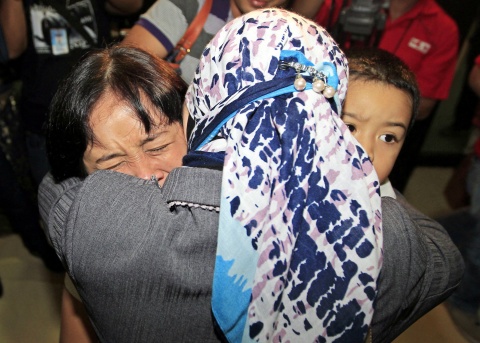 A relative of one of the passengers on board of the missing Sukhoi Superjet 100 aircraft cries as she is comforted by another after checking the passanger list at Halim Perdana Kusuma Airport in Jakarta, Indonesia, 09 May 2012. EPA/BGNES

Indonesian authorities have suggested that the Russian airplane that has gone missing near Jakarta may have been hijacked.

Another version for the disappearance of Russia's Sukhoi Superjet-100, which went missing on Wednesday on a demonstration flight near Indonesia's capital is that it might have crashed into a mountain in poor visibility, RIA Novosti reported.

The Russian passenger plane has failed to return to the airport after a demonstration flight. Shortly before radio contact was lost, 20 minutes after takeoff, the pilots had requested permission to descend from 10,000 feet (3,000 meters) to 6,000 feet (1,800 meters), air traffic controllers said, as cited by RIA Novosti.

After it was cleared for descent the plane started turning right and descending but then disappeared from the radar screens at an altitude of 6,200 feet in a mountainous area 60 kilometers from Jakarta.

The spokesman said that the plain disappeared in the area of Mount Salak, which is 7,254 feet (2,211 meters) high.

There are 44 people on board, including eight Russians and 36 foreign nationals. The Russian Embassy in Jakarta said that in addition to the Russian crew, there were only citizens of Indonesia on board.

Crisis Staff however reported that there were 50 people on board, including eight Russians, two Italians, one French and one American citizens and 38 citizens of Indonesia.

Sukhoi Superjet-100 was fully functional, United Aircraft Corporation reported on Wednesday. Earlier in the day the SSJ-100 carried out two demonstration flights in the Indonesian capital as the manufacturer said Pakistan's Air Indus has shown an interest in purchasing eight SSJ-100s.

The SSJ-100 arrived in Jakarta as part of a demonstration tour of six Asian countries. It has been to Myanmar, Pakistan and Kazakhstan, and after Indonesia was due to visit Laos and Vietnam.

The Superjet 100 is a medium-haul passenger aircraft developed by Sukhoi in cooperation with U.S. and European aviation corporations, including Boeing, Snecma, Thales, Messier Dowty, Liebherr Aerospace and Honeywell.