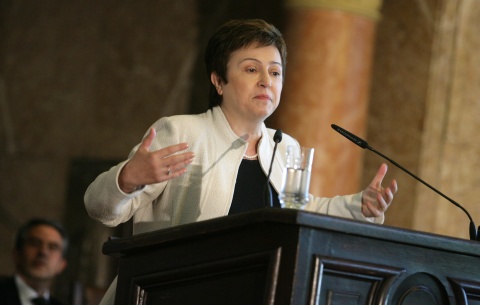 Bulgaria is among the EU countries that can afford to spend a little bit more in the conditions of the crisis, according to EU Commissioner Kristalina Georgieva

Georgieva arrived in Sofia to attend will festivities marking May 9, Europe Day.

"Our country has a very low external debt amounting to 16% of the GDP, which is why I believe that if we have a reserve we should inject it in employment," Bulgaria's EU Commissioner said Wednesday in an interview for the morning broadcast of private TV station bTV.

"Djankov is more cautious and I respect this stance," Georgieva added.

She listed education, healthcare and job creation as the most important issues for Bulgaria at the moment.

The EU Commissioner for International Cooperation, Humanitarian Aid and Crisis Response voiced hopes that the healthcare reform in Bulgaria would be prepared and implemented in the very first days of the next Cabinet's term in office.

"It is madness to spend increasing amounts of money only to receive increasingly deteriorating results," she added.

Georgieva noted that the demographic crisis highlighted the importance of educating each and every child.

She criticized the business sector in Bulgaria for investing the smallest amount in the EU in qualification and re-qualification.

"Our companies depend on stealing staff from one another, but this option will eventually be exhausted. The low labor productivity stops us from moving forward," she added, reminding that labor productivity in Bulgaria was 20% of the EU average, which, in its turn, was 60% of that in the US.

Asked to comment on the election results in Greece, Georgieva suggested that Bulgaria should act as a good neighbor and give people time to find their way forward and try to step into the shoes of other people, be they Greek, German or Finns.

"Europe is the biggest and the most powerful economy in the world, we have highly educated people, the common market is well developed and we also have the potential of European science and loads of positive energy to go forward," she stated.

"500 million Europeans have a higher chance of success than 70 million in Germany. If we now backpedal on the assumption that Europe can only be strong if it is united, we shall make a huge strategic mistake," the EU Commissioner warned.

She suggested that macroeconomic stability, growth, reforms and employment would top the agenda of the next meeting of European leaders.

Asked whether she was considering a political career in Bulgaria after the end of her term in office, she cautioned against jumping to conclusions, adding that she was pleased with her mission to help people in particularly critical situations as an EU Commissioner.