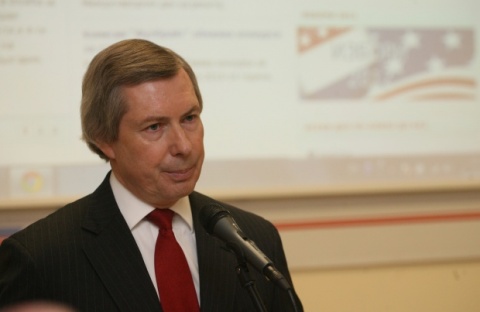 US Ambassador to Bulgaria James Warlick has assured that the new law will not target ordinary citizens. Photo by BGNES

Six ambassadors to Bulgaria lauded Monday the newly passed illegal assets confiscation bill, cautioning that the next step was to ensure its smooth implementation by an independent and strong commission.

The diplomats shared their views on the new law during Monday's morning broadcast of the Bulgarian National Television (BNT).

The ambassadors vowed to follow closely the formation of the commission to make sure that the process is transparent and impartial.

"We all agree that it is a positive step but this is not the ultimate goal because the fight against corruption also requires other measures that should be integrated into the system...you have quite a long road to travel,"French Ambassador Philippe Autie stated, as cited by news portal dnevnik.bg.

The six diplomats confirmed that the new law was not targeted at ordinary citizens and would not injure their interests, as the opposition claimed.

"I would like to congratulate the Government and the Parliament because they passed a very important piece of legislation. This is very important for Bulgaria's fight against organized crime, so you have my sincere congratulations on passing the bill despite the serious opposition," British Ambassador Jonathan Allen said.

He noted that the existing legislation in the sphere in his home country was harsher than Bulgaria's newly passed bill.

"While it is true that the people may feel anxious about it, I believe that what is important is that the five members of the commission are appointed in an open and transparent manner, with the candidates presenting their qualifications and the Parliament studying their records, or even questioning them, if necessary, so that you can make sure that the watchdog will operate successfully," Jonathan Allen added.

US Ambassador James Warlick expressed confidence that the new confiscation procedure was adequate and that it provided sufficient protection of human rights.

"Bulgarians must know that their rights are protected by the law. The government cannot deprive people of property at random, and we in the US are positive that it will not happen," Warlick commented.

He congratulated the center-right GERB government on adopting a new instrument for combating organized crime.

"It is obvious that a single bill can never solve all problems but this is some progress. Progress is just what Bulgaria needs if the country wishes to become a modern community in the 21st century, just like the old, the original EU member states," Danish Ambassador to Bulgaria Kaare Janson argued.

German Ambassador Matthias H?pfner also defined the adoption of the illegal assets bill as progress for Bulgaria, stressing that the legislation had to be implemented by a strong and independent commission.

The diplomat assured that the new piece of legislation was not aimed at ordinary citizens because it stipulated a substantial gap between declared income and property acquisitions.

He lauded the much-contested inclusion of administrative offences leading to a profit of over BGN 150 000 as a reason for launching the proceedings.

"It is essential that civil society monitor the work of the commission tasked with implementing the Law on the Confiscation of Illegally Obtained Assets," Dutch Ambassador Karel van Kesteren reasoned.

The ambassadors of EU countries also discussed the anticipated impact of the move on the next EC report on Bulgaria under the cooperation and verification mechanism.

Karel van Kesteren pointed out that the Netherlands needed two positive EC reports to approve the Bulgaria's accession to Schengen.

Commenting on the claims of Prime Minister Boyko Borisov that Bulgaria's borders were better guarded than the Dutch ones, the Dutch Ambassador said that the law-enforcement bodies in the Netherlands were pleased with the cooperation with their Bulgarian colleagues.

The bill will take effect in six months' time and the commission in charge of implementing it is to be appointed within two months after its entry into force.

The new piece of legislation provides for a non-conviction based confiscation of illegally acquired assets.

The procedure can be launched against people charged with serious crimes such as terrorism, organized crime, kidnapping, human trafficking, pimping, and tax evasion, among others.

The law will apply in cases of a minimum discrepancy of BGN 250 000 between income and property acquisitions tracked for a period of 10 years back.

The major opponents of the bill were the Bulgarian Socialists Party (BSP) and the ethnic Turkish Movement for Rights and Freedoms (DPS) party.