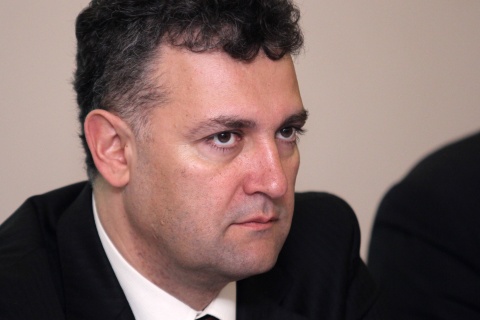 Valentin Nikolov is the new CEO of the Kozloduy NPP. Photo by BGNES

Bulgaria's Deputy Economy Minister Valentin Nikolov has been appointed in charge of the country's only operational nuclear power plant in Kozloduy in a surprising government move.

A former ruling party GERB MP, Nikolov, who was made one of Bulgaria's four Deputy Ministers of Economy, Energy, and Tourism, less than two months ago, has been appointed the CEO of the Kozloduy NPP by the plant's board in a vote on Monday.

"The reshuffle has been necessitated by the need to improve the coordination and the speed of work on extending the life of Units 5 and 6 at the Kozloduy NPP, and the construction of a seventh reactor there," Bulgaria's Economy Minister Delyan Dobrev explained upon presenting Valentin Nikolov to the Kozloduy plant team on Monday, as cited by BGNES.

Nikolov has been the Deputy Minister in charge of the working group to extend the life of the tow operational 1000 MW units at the Kozloduy NPP.

"The main priority in the nuclear energy policy will be to extend the life of Units 5 and 6 of the Kozloduy plant by 15 years. This is my personal responsibility, not only the government's responsibility, which is why I proposed that Valentin Nikolov took this job," Dobrev explained.

Valentin Nikolov has an engineering degree. He entered politics in 2009 when he got elected a MP from the GERB party of Prime Minister Boyko Borisov.