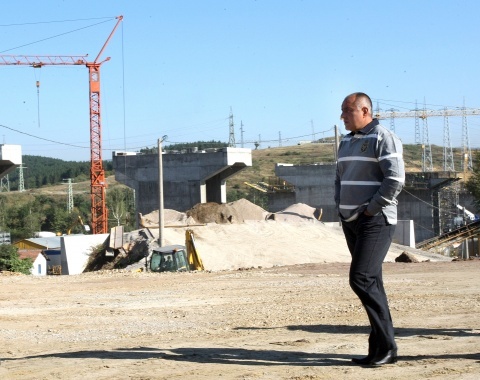 Bulgaria's Prime Minister, Boyko Borisov, has reiterated many times that he wants to remain in history as the leader, who build the country's highways. Photo by BGNES

Bulgaria's Prime Minister, Boyko Borisov, surprisingly joined Monday the inspection of the progress of construction works on the Hemus highway in northern Bulgaria.

According to earlier official information, the works on the highway had to be inspected by the Minister of Regional Development, Lilyana Pavlova, the Mayor of Sofia, Yordanka Fandakova, and the Chairman of the Managing Board of the Road Infrastructure Agency, Lazar Lazarov.

Borisov arrived without any prior warning and immediately promised that the segment between the "Yana" junction and the Sofia beltway would be finished ahead of schedule, by May 2013.

"The deadline is September 2013, but it should be ready by May. We are delayed in constructing this section because many birds are nestling in the nearby woods. There are also several storks, and we want to act correctly towards all ecologists. We are advancing very well on the other side, but here we have to wait for the baby storks until June, and then we will start construction," the PM explained.

When completed, the highway, whose construction began in the distant 1975, during the Communist regime of Todor Zhivkov, will connect the capital Sofia with the Black Sea city of Varna.

The project is co-financed by the EU Cohesion Fund through the Operational Transport Program 2007 – 2013.