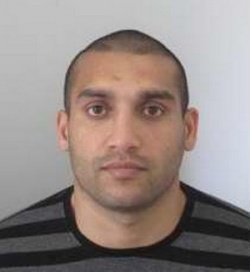 Varban Borisov is wanted by the police in the Bulgarian capital Sofia for a serious crime. Photo by the Interior Ministry

Bulgarian police have arrested overnight seven people during an attempt to rob at gunpoint a pawn shop in the capital Sofia "Suhata Reka" district.

Another person had been arrested later bringing the total of the detainees in the special police operation, codenamed "The Dangerous" to eight – among them one woman, one policeman, and one employee of the Ministry of Defense.

The alleged ringleader, Varban Asenov Borisov, 31, is still at large and wanted. He has a long rap sheet, mainly for armed robberies.

Deputy Prime Minister and Interior Minister, Tsvetan Tsvetanov, told the media Sunday that the group had been followed constantly in the last 20 days and all criminal activities have been documented. According to Tsvetanov, most of the members of the gang have criminal records for armed robberies, during some of which people have been harmed.

The Minister further informed that the police raids of two addresses in the capital and in the western city of Pernik yielded two "Kalashnikov" automatic guns, two handguns, a rifle, a gas pistol, ammunitions, gold, cash and illegal drugs.