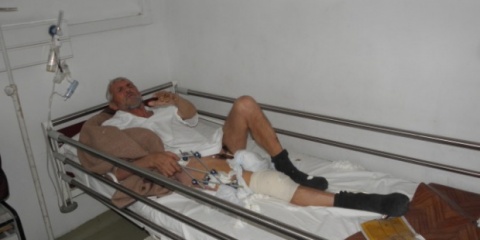 Kosta Spirov did not manage to give a coherent account of his dire condition. Photo by BGNES

Greek authorities have handed down Friday an emaciated Bulgarian citizen at the Ilinden - Exochi checkpoint.

The 55-year-old Kosta Spirov from the town of Kotel has been then admitted to Blagoevgrad hospital, being in a state of physical exhaustion and weighing little more than 50 kg.

Spirov's case resembles that of Kadir Mehmed, who was similarly handed down by Greek border police to Bulgarians at Ilinden, back in August 2011.

According to initial information, Spirov has spent time in a Greek hospital after having broken his right hip joint.

Border police also brought with him his medical documents. The unofficial reason for handing him down to Bulgaria is that he failed to pay for his treatment in Greece.

According to medics at the Blagoevgrad hospital, Spirov is not completely coherent and cannot relate his story, but claims to have been doing odd jobs in Greece ever since 1989.

He also said he did not get any bad treatment while working there, or while being hospitalized.

Bulgarian authorities have contacted Spirov's relatives, who are to take care of him.