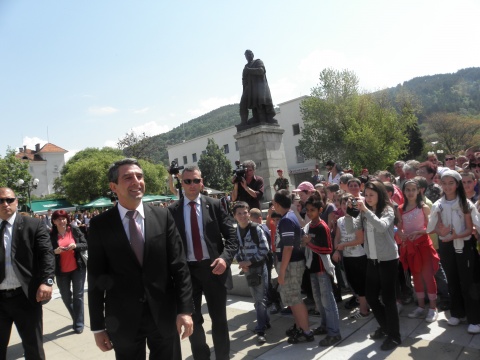 Bulgarian President Rosen Plevneliev (front L) after laying flowers on the monument of Bulgarian revolutionary hero Gotse Delchev in Blagoevgrad on Friday, just before the Bulgarian Ambassador in Skopje was assaulted trying to do the same. Photo by BGNES

Bulgarian President Rosen Plevneliev has hinted that Bulgaria could block Macedonia's EU accession in a statement over the assault on Bulgarian Ambassador Ivan Petkov in Skopje on Friday.

Plevneliev's statement came Friday night, shortly after Bulgaria's Foreign Minister Nikolay Mladenov issued a strong statement condemning the attack by Macedonian nationalists on the Bulgarian Ambassador in Skopje Ivan Petkov and other Bulgarians who were trying to honor the memory of Bulgarian revolutionary hero Gotse Delchev.

Nationalist "hooligans" have staged an organized attack against a delegation led by the Bulgarian Ambassador in Macedonia Ivan Petkov, which was trying to lay flowers at the grave of Bulgarian revolutionary hero Gotse Delchev (1872-1903).

The newly-appointed Bulgarian Ambassador Ivan Petkov together with local Macedonian Bulgarians attempted to lay wreaths at the grave of Gotse Delchev in the St. Spas Church in Skopje, on day of Delchev's death, May 4, when he and those accompanying him were attacked by Macedonian nationalists, the Focus news agency reported citing witnesses. According to Macedonian Bulgarians from the delegation, the attackers were from a nationalist wing of the ruling Macedonian party VMRO-DPMNE.

"Bulgaria will work for the EU accession of Macedonia but only if Macedonia acts in accordance with this support," Bulgarian President Plevneliev stated regarding the consequences of Skopje incident with the Bulgarian Ambassador.

Plevneliev made it clear that he will summon the Macedonian Ambassador in Sofia Blagoj Handijski to give an explanation over the incident with the Bulgarians trying to honor the memory of Gotse Delchev in Skopje.

"We welcome and support the membership of every state in the European family. However, if somebody wants to be a member of this family, they need to prove with actions, not with words, that they love the other member states," the Bulgarian head of state said while laying flowers on the monument of Gotse Delchev in the town of Gotse Delchev.

The Bulgarian President described the incident in Skopje in which the Bulgarians attempting to honor revolutionary hero Gotse Delchev were attacked with force, and thus forced to flee, failing to lay flowers at the hero's grave, as "unacceptable".

The authorities in Macedonia's capital Skopje have prevented Bulgarian diplomats and Macedonians with Bulgarian self-consciousness from honoring the grave of Gotse Delchev at several instances in the past on both Delchev's birthday - February 4, and the day of his death - May 4.

Back on January 13, 2007, Bulgarian citizens were attacked and beaten by Macedonian nationalists upon laying flowers at the memorial of Bulgarian female hero Mara Buneva, who resisted the Serbian / Yugoslavian occupation of the region of Vardar Macedonia in the 1920s.

The years after Yugoslavia's collapse and Macedonia's independence in 1991 have seen both an intensification of Macedonian nationalism based on the identity invented in the Yugoslavian period, and an erosion of the Macedonian national idea, with a few dozens of thousands of Slavic Macedonians claiming Bulgarian citizenship on the grounds of their Bulgarian ethnicity.

While in the years before the Ilinder-Preobrazhenie Uprising of 1903 - the largest uprising of the Bulgarians in Macedonia and Thrace against the rule of the Ottoman Turkish Empire - VMORO's goal was to unite the respective regions with the liberated Bulgaria, after the uprising was crushed, the organization split into several factions with different agendas. Keeping in mind the multiethnic population of the regions of Macedonia and Thrace at the time, Gotse Delchev is known to have voiced the vision of creating an autonomous entity out of the European remaining European provinces of the Ottoman Empire, a vision that was not rejected by the Bulgarian governments in Sofia at the time even though they never doubted the Bulgarian identity of the Slavic Macedonians.

Delchev's remains were transferred to the authorities of the communist Yugoslav republic of Macedonia in the late 1940s by the authorities of communist Bulgaria, which, following the Comintern policies imposed by the Soviet Union, briefly accepted the invention of a distinct Macedonian identity.