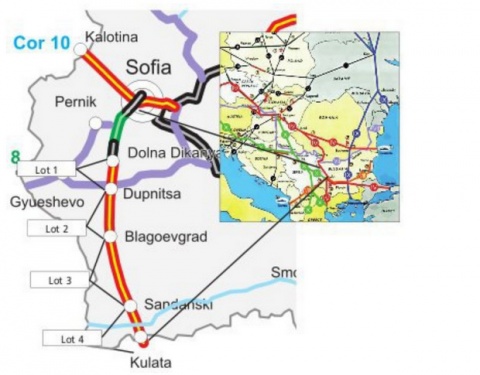 A total of 15 companies have made bids in the tender for the engineering and construction of the southwestern Bulgarian highway Struma (running from Sofia to the Greek border), including several unexpected first-timers.

The 15 bids for the construction of Lot 2 of the Struma Highway, a 37-km section from the town of Dupnitsa to the city of Blagoevgrad were opened on Friday.

The bidders which have never tried out for a Bulgarian highway tender before include the Russian company Mostovik, the Spanish FCC Construction (currently building the second Bulgaria-Romania Danube bridge), and five Italian construction companies.

The tender for Lot 2 of the Struma Highway has attracted public attention since it is the first highway tender in Bulgaria for engineering and construction in which the low price is not the decisive factor for winning it because of the special features of the southwestern road such as the rough terrain and the environmental requirements.

Thus, the Bulgarian Road Infrastructure Agency will pick 8 bidders with the most suitable experience and the highest turnovers, and those will be expected to provide price offers by early July.

The construction of Lot 2 of the Struma Highway is expected to cost about BGN 200 M, VAT included, and will be funded under EU Operational Program Transport; it is supposed to be completed in 27 months, once an executor gets selected.

According to the head of the Road Infrastructure Agency, Lazar Lazarov, the Agency will most likely have made a contract with an executor by November 2012.

Out of the 15 bidders for Lot 2 of Struma, five are independent bidders – the Greek companies Aktor, GEK Terna, and J&P Avax, Austrian company Strabag, and Italian company Societa Italiana Per Condotte D'Acqua.

The other four Italian companies bidding in the tender are united in pairs: Todini Construzioni Generali SpA and Salini Construction, and Salvatore Matarrese SpA together with ICS Grandi Livori SpA.

A consortium called DMX, consisting of the Turkish company Dogus, Russian company Mostovik, and Varna-based Bulgarian company Hydrostroy has been noted as one of the most interesting participants in the tender.