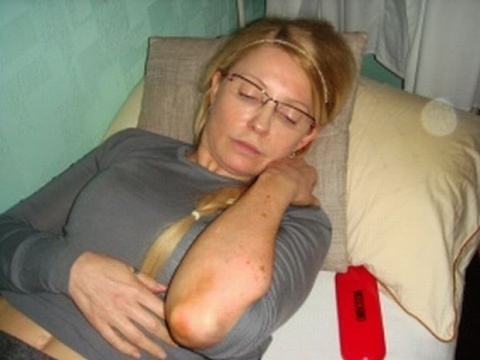 Ukraine's ex PM Yulia Tymoshenko shows bruises that she claimed she got during her transportation from jail to a hospital, April 27, 2012, Photo by EPA/BGNES

Bulgarian President, Rosen Plevneliev, has announced that he is canceling his participation in the meeting of Heads of State from Central Europe to be held in Yalta, Ukraine.

The Bulgarian Presidential Office press center notes that one of the reasons for the decision is the situation around the former Prime Minister of the Ukraine, Yulia Tymoshenko.

Tymoshenko has launched a hunger strike to protest her alleged beating in jail, where she is serving a seven-year sentence. She has been sentenced for abuse of power for making a gas supply contract with Russia in 2009, after the Russian-Ukrainian gas crisis; she herself claims that her political rival, Ukrainian President Viktor Yanukovych is using the country's judiciary to punish her.

EU officials also view the sentence as part of the current government's vendetta against her old cabinet team.

Just one day ago, the EU's Kiev mission announced that all EU commissioners will skip next month's Euro 2012 football championship in Ukraine to protest the country's treatment of its jailed ex-premier.

Germany's Interior Minister, Hans-Peter Friedrich, who is also in charge of sports, already warned that football matches in the Ukraine might be cancelled all together over the issue.

Also on Thursday, Russian Prime Minister and President-elect, Vladimir Putin responded to calls for a boycott of the Euro 2012 football championship in the Ukraine by saying that sport and politics should not mix.