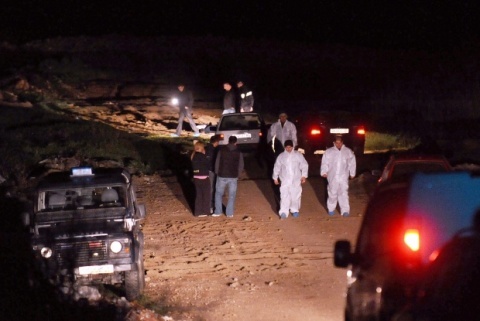 The five victims, all ethnic Macedonians, were found shot dead on April 12 near an artificial lake. Photo by EPA/BGNES

There are no Bulgarian citizens among the five men, who became victims of a gruesome murder that took place last month near Skopje in Macedonia.

The information was reported by the Bulgarian Foreign Ministry in the aftermath of reports that at least one of the people, who were shot, Aleksandar Nakjevski, held a Bulgarian passport. The Foreign Ministry announced that they base their assertion on a probe conducted by the Macedonian-based Interpol bureau.

"We express our deepest sympathies to the families of the victims of this tragedy. We join the appeal of the European Parliament to the media to report correctly the events and the pending trial. We support the effort of authorities in Macedonia to investigate the case and punish the culprits," the Foreign Ministry says in a statement.

Five suspects have already been arrested and charged with terrorism by the Macedonian prosecutor's office.

On Tuesday, a total of twenty alleged radical Islamic militants were arrested over the murder of the five  men in Macedonia on April 12, the worst case of mass murder in the tiny Balkan country since it gained independence 21 years ago.

The victims, all ethnic Macedonians, were found shot dead on April 12 near an artificial lake at Butel. Four were in their 20s, and the fifth was in his 40s. Media identified the dead as Filip Slavkovski, Aleksandar Nakjevski, Tsvetanco Atsevski, Kire Trickovski and Borce Stefanovski.