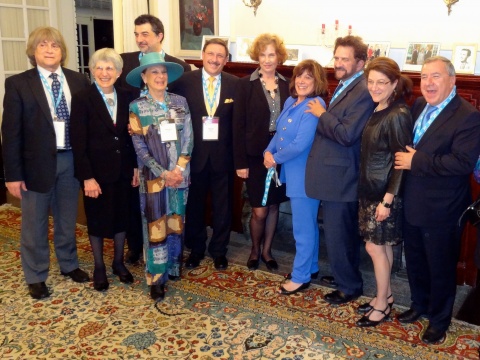 Bulgarian Ambassador to the USA Elena Poptodorova (middle) hosted a friendly dinner for the Bulgarian delegation and other delegates at the AJC Global Forum 2012 in Washington D.C. Among them Victoria Schonfeld, (second right) Assistant Executive Director

The American Jewish Committee is among the strongest advocates for Bulgaria's better in the US, Maxim Behar, a prominent Bulgarian media and public relations expert said after his brief meeting with the Executive Director of AJC David Harris in Washington D.C.

Behar is an official delegate of the AJC Global Forum 2012, which is taking place at the Grand Hyatt Hotel in the US capital.

"I've participated in the annual forums of the AJC for many years, and can definitely say that you can hardly find a more active and convinced promoter of Bulgaria not only in the United State, but also in many other countries than the top management of the American Jewish Committee," Behar stated.

"Bulgaria really must take care of its image abroad much more actively and follow the benchmarks which the AJC has created in the past couple of years," he added.

Behar has also managed to invite representatives of the most prominent US financial businesses to the forthcoming investment conference in Sofia "Bulgaria: Business UP", which is to take place on May 11, 2012, at the Sheraton Sofia.

The "Bulgaria: Business UP" conference is organized by the largest Bulgarian English-language media Novinite.com (Sofia News Agency) and the InvestBulgaria Agency, a government body.

In mid November 2012, a huge Bulgarian event in one of the central New York synagogues will commemorate the forthcoming 70th anniversary of the saving of more than 50 000 Bulgarian Jews from the Holocaust death camps, Rabbi David Greenberg announced earlier at a dinner hosted by the Bulgarian Ambassador to the USA Elena Poptodorova for participants in the AJC Global Forum 2012.

The dinner was attended by the high-ranking management of the AJC, and by international delegates, including the two other Bulgarian delegates at the Forum - Victor Melamed and Solomon Bali.

During the dinner Maxim Behar, who will also be speaking at the "Bulgaria: Business UP" investment conference in Sofia next week, stated his vision about the need to achieve a rapid improvement of Bulgaria's image abroad, among others, by organizing a world-wide campaign to explain the investment and taxation advantages of the country.