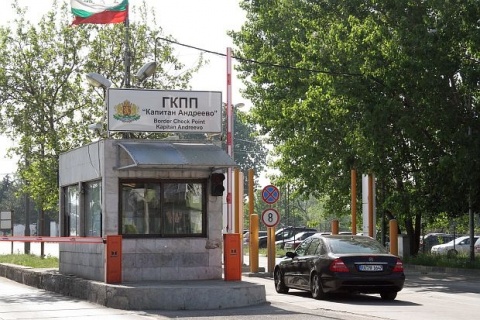 Charges have been pressed against 8 of the total of 32customs officers detained during the "Customs" special operation at the Bulgaria–Turkey border crossing at Kapitan Andreevo, according to Sofia City Prosecutor Nikolay Kokinov.

Kokinov told journalists Thursday that five had been charged with participating in an organized crime group specialized in racketeering and three were facing bribery charges.

He specified that the prosecuting authority would insist that the eight be remanded into custody.

The case will most likely be heard by the Specialized Criminal Court.

On Wednesday evening, the day shift of 32 customs officers at the Kapitan Andreevo border crossing point was detained within a special operation codenamed "Customs" conducted by the Interior Ministry and the prosecution.

A senior customs officer and a customs expert were found to have a total of BGN 14 000 in different currencies.

Apart from this sum, ten customs officers were found to have smaller sums of EUR 150-180 and 21 stacks of cigarettes without excise stamps.

The homes of two customs officers were inspected on Thursday.

A safe deposit box with USD 5000 in it was found on one of the premises, the other home containing the same amount of money hidden under a mattress.

Kokinov told journalists that the special operation had been prepared for over 3 months and was aimed at stemming the extortion of people crossing the border and forwarding firms.

The Sofia City Prosecutor explained that the highest-ranking person was the boss of the group.

"The scheme has obviously been implemented for quite some time. According to evidence gathered so far, the price tags range from EUR 5 to EUR 500, depending on types of goods and people," Kokinov stated.

"We are now trying to figure out the principles behind the distribution of the money. We first thought that the corrupt officials on this shift would be 6-8 people, but the findings surpassed our expectations," he added.

The Sofia City Prosecutor noted that the pre-trial proceedings had started in 2011 and the group had been monitored, including through special surveillance devices, and the Haskovo District Prosecutor's Office had been in charge of the case.

The Sofia City Prosecutor's Office is now in charge of the case with instructions from Chief Prosecutor Boris Velchev.