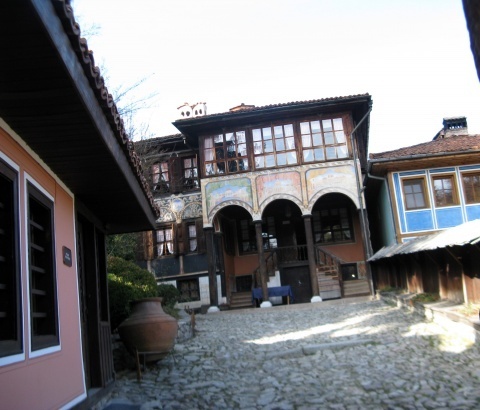 The Bulgarian town of Koprivshtitsa was one of the centers of the April Uprising in 1876 and is known for its traditional Bulgarian architecture, making it a very popular tourist destination. Photo by Sofia Photo Agency

The town of Panagyurishte in central Bulgaria is the focal point Tuesday of commemorations of the 136th anniversary of the 1876 April Uprising for the liberation of Bulgaria.

President Rosen Plevneliev, Parliament Chair Tsetska Tsacheva and other high-ranking statesperson are set to visit Panagyurishte, one of the centers of the Uprising, to take part in the official celebrations Tuesday evening.

Celebrations take place in several other towns, such as nearby Koprivshtitsa, where the first shot of the uprising was fired, as well as the cities of Plovdiv and Stara Zagora.

Officials and citizens will laid down flowers at the tomb of Koprivshtitsa native, revolutionary Todor Kableshkov, in honor of the 160th anniversary of his birth.

In all towns that played key role in the revolutionary past of Bulgaria, there will be prayers and events dedicated to the historical date.

Church bells will ring across the country, calling to all Bulgarians to remember the historical date of April 20, 1876 and those who fought for their freedom.

The April Uprising was an insurrection organized by Bulgarians in the Ottoman Empire from April to May 1876, whose indirect result was the establishment of Bulgaria as an independent nation in 1878.

The 1876 uprising was the last and biggest in a string of Bulgarian revolts, but spread only in parts of the Bulgarian territories.

In November 1875, activists of the Bulgarian Central Revolutionary Committee met in the Romanian town of Giurgiu and decided that the political situation was suitable for a general uprising. The uprising was scheduled for April or May 1876.

The territory of the country was divided into five revolutionary districts with centers in Vratsa, Veliko Tarnovo, Sliven, Plovdiv and Sofia.

The uprising started, but the reaction of the Ottoman authorities was quick and ruthless. Detachments of regular and irregular Ottoman troops (bashi-bazouks) were mobilized and attacked the first insurgent towns as early as April 25th.

By mid-May, the insurrection was completely suppressed. At least 15 000 people were killed in the suppression of the uprising by the Ottomans.

Some 80 villages and towns were burned and destroyed and 200 others were plundered. The atrocities which accompanied the suppression of the insurrection reached its peak in the northern Rhodopes.