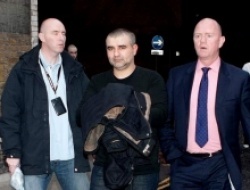 Tihomir Georgiev, who has a reputation for slicing off enemies' ears and fingers, fled to the UK last summer. Photo by The Sun

A brutal Bulgarian gangster, who was caught in London in January on an alert from an investigation of The Sun, continues to build up his case in court against extradition, saying he will be tortured in his home country.

The solicitor of Tihomir Georgiev, 43, notorious for slicing off victims' fingers and ears, told Westminster Magistrates' Court they would fight extradition.

"There are good foundations for torture and we will fight them in court. We will be bringing in an expert in Eastern Europe, a political scientist from the University of London, to give evidence," solicitor Robert Katz told the court on Monday, as cited by local media.

Prosecutor Hannah Hinton told the court that Georgiev, who is on legal aid, was also using the Human Rights Act to oppose deportation.

A month ago Georgiev, also known as Tisho the Boxer, told Westminster magistrates court that he was tortured by authorities in Bulgaria which, he said, are "corrupt at the highest level".

Georgiev, who fled to the UK last summer, has been sentenced to 15 years in Bulgaria for stabbing to death a gang rival.