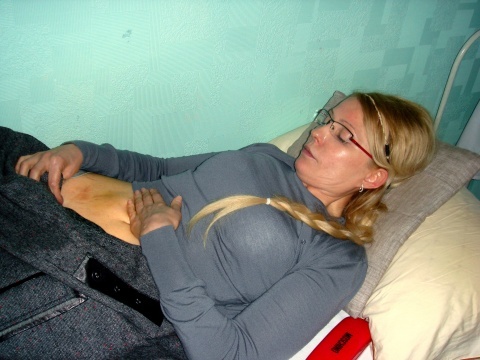 An undated picture made available on 27 April 2012 shows Yulia Tymoshenko showing her bruises, from alleged beatings by prison guards, in Kachanivska prison in Kharkiv, Ukraine. EPA/BGNES

As top EU officials have apparently decided to boycott events in Ukraine due to concerns over jailed former Prime Minister Yulia Tymoshenko, the country has described the move as "Cold War tactics."

"I would not like to think that German state leaders can reanimate methods of the Cold War period and make sports a hostage of politics," Voloshin has told Interfax.

EU Commission President Jose Manuel Barroso declared on Monday that he has no intention of visiting Ukraine during the football championship unless there is a swift improvement in the human rights situation there, while Justice Commissioner Viviane Reding announced earlier that she would not attend the ceremonial Euro 2012 opening on June 8.

German Chancellor Angela Merkel has also warned that she may boycott all Euro 2012 matches in Ukraine and expects her ministers to do the same.

Euro 2012 is co-hosted by Ukraine and Poland and is to take place between June 8 and July 1.

Czech President Vaclav Klaus has canceled his visit to attend a summit of Central European Presidents May 11-12 in Ukraine because of Tymoshenko's treatment, Klaus spokesman Radim Ochvat said on Monday.

The former Prime Minister of Ukraine is in jail on a seven-year sentence for abuse of power over the signing of an allegedly unfavorable gas supply contract with Russia after the 2009 gas crisis.

Tymoshenko herself claims that she is being targeted by her political opponent, Ukraine's current President Viktor Yanukovych.