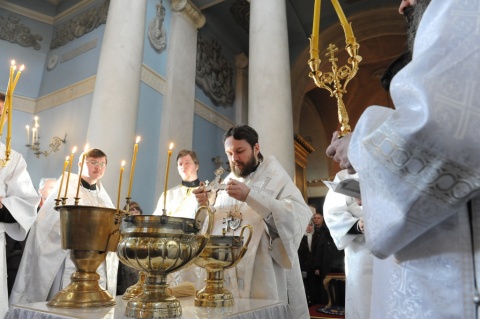 Hilarion Alfeyev, bishop of the Russian Orthodox Church, metropolitan of Volokolamsk, chairman of the Department of External Church Relations and permanent member of the Holy Synod of the Patriarchate of Moscow (C). File photo.

Bishop Hilarion is part of a large Russian church delegation, headed by Patriarch Kirill, which is in in Bulgaria since Friday.

"We support this idea and like we have said before, we are ready ot send monks to Kosovo," said the Russian Church foreign affairs head in an interview for the Bulgarian National Radio Sunday.

"In case we do that, we are oblidged to act in the interest of the Serbian Orthodox Church," stressed Russian metropolitan Hilarion.

"The situation in Kosovo is quite complicated, and this includes monasteries located in the territory populated by a majority of ethnic Albanians, who are hostile not only to Serbia and to Serbs, but also to their religion," explained he.

Bishop Hilarion said that monasteries in Kosovo are vexed with problems relating to security, preserving the monastic life, and preserving the cultural heritage.

He stressed that the Russian Orthodox Church will co-operate with its Serbian counterparts to help them in that complicated situation.