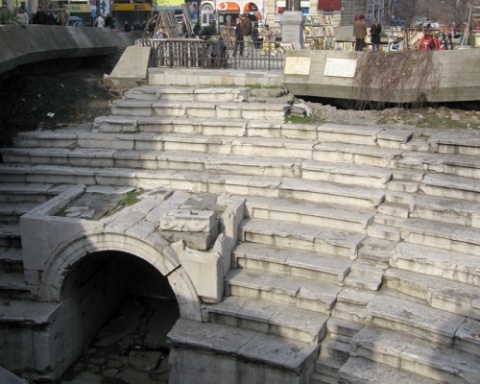 The restoration of Plovdiv's ancient Roman stadium was launched February 2010 with funding aid from European institutions. Photo by JPD

The Tourism Unit of Bulgaria's Ministry of Economy, Energy and Tourism will be moved to second-larges city Plovdiv from capital Sofia.

This was announced Sunday by Bulgarian PM Boyko Borisov to Plovdiv to officially launch a number of renovated sites.

"The Tourism Unit of the Ministry, together with vice-minister Ivo Marinov, will be moving to Plovdiv," said the Bulgarian PM.

Borisov, together with FinMin Simeon Djankov, EU Funds Minister Tomislav Donchev and Sports Minister Svilen Neykov were present at the opening of the restored Roman stadium in Plovdiv.

The new building of the Tourism Agency is located right next to the Roman stadium in the center of the city, announced Borisov.

After the ceremony, the Bulgarian PM and his ministers sat down for a sip in one of the cafes in Plovdiv's pedestrian main street, before heading for Plovdiv University.