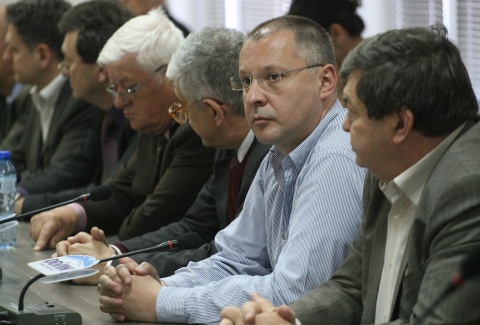 The chair of the Bulgarian Socialist Party and ex PM Sergey Stanishev has become one of the first to sign the petition for a referendum on the construction of the Belene Nuclear Power Plant.

The controversial project for a second Bulgarian NPP, to be located at the Danube town of Belene, which was first started in the 1980s and was supposed to be built by Russian state company Atomstroyexport, was abandoned in March 2012 by the center-right government of Prime Minister Boyko Borisov and the GERB party, the rationale being that it is economically unfeasible for Bulgaria.

Stanishev, who has been among the champions for the construction of the Belene plant, signed the referendum petition initiated by his own part in the southern city of Smolyan on Saturday.

He urged Bulgarians to flock to sign the referendum petition, as, in order to be approved by the Parliament, it needs to collect 500 000 signatures in three months.

The Socialist leader, who also the interim President of the Party of European Socialists, did assume that there might provocations on part of the ruling center-right party GERB against the referendum initiative.

"The Belene NPP is not just a project. It is a chance for Bulgaria to develop as a hi-tech nation. No mega-projects have beens started in Bulgaria in the past 22 years, and Belene is our chance," Stanishev declared, as cited by BGNES.

The PES President also spoke about the "leftist" wave in Europe, pointing out Friday's development in Romania, in which the Cabinet was brought down in a no confidence vote, and the leftist opposition leader Victor Ponta was nominated as Prime Minister.

Stanishev slammed the policies of the rightists across Europe, saying that there are 25 million unemployed people in the EU already.

"Bulgaria is no exception. In the past 2.5 years, the GERB government doubled the unemployment in the country, and depleted the fiscal reserve that they inherited from our Cabinet," he said.

While he mentioned that the next government in power will have a hard time with Borisov's fiscal heritage, he did claim that investments and consistent policies can allow the Bulgarian Socialist Party to get Bulgaria out of the crisis.