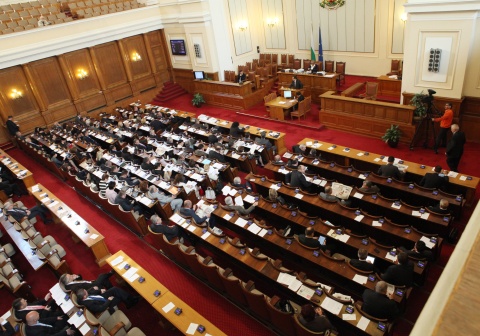 Bulgaria’s MPs heated debates over the bill for illegal assets forfeiture continued for more than fourteen hours on Thursday and will be resumed on Friday. Photo by Sofia Photo Agency

Bulgarian authorities will have the right to launch probes and seize unexplained wealth, worth more than BGN 150,000 which has been acquired over the last 15 years under the draft law, the MPs decided.

They however will not act upon anonymous tip-offs.

The probe can continue up to one year and may be extended for another six months, the law says.

It sets out a regime for non-conviction based asset forfeiture – the commission in charge will be entitled to launch proceedings if it can make reasonable assumption that the property is illegally acquired.

The law envisages that the procedure will be launched if the person is indicted with terrorism, participation in an organized criminal group, kidnapping, enticement to prostitution, human trafficking, theft, robbery, embezzlement, unprofitable deal drugs, tax evasion, as well as hiding precious goods, which is usually punished with probation or just a fine.

The heated debates over the bill continued for more than fourteen hours on Thursday and will be resumed on Friday.

The opposition slammed the law, saying that they create conditions for persecution and repression of political opponents, while making untouchable the white color criminals who piled up their wealth through privatization deals and administrative crimes.

According to unconfirmed information the bill will also probe the financing of parties, as well as participants in public procurements.

The rulers are in a hurry to adopt the long-delayed bill in a bid to please Brussels ahead of its upcoming report on the country's progress in justice and home affairs, insiders say.

The ruling majority in parliament seeks to pass the law by the beginning of May, when a delegation of the European Commission will arrive in the Balkan country to collect information for the monitoring report.

The European Commission will publish in July its monitoring report on law enforcement and the fight against corruption and organized crime in the two EU newcomers – Bulgaria and Romania.

The document is said to be crucial for Bulgaria, as it will indicate whether the Co-operation and Verification Mechanism (CVM), which was established on the accession of Bulgaria to the EU to help it put in place an impartial, independent and effective judicial and administrative system, will be lifted in 2013 or be extended.

The long-delayed and much-changed bill was initially expected to be voted on second reading by the Bulgarian Parliament before Easter, or mid-April.