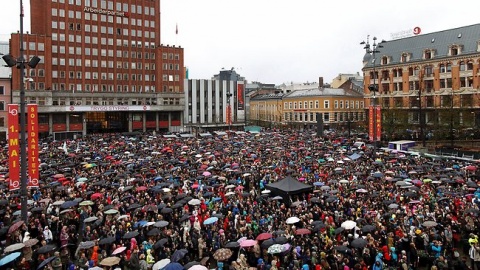 About 40,000 people turned up in poor weather to sing a popular children's song "Children of the Rainbow" at the Youngstorget square in Oslo Thursday. Photo by NTB Scanpix

Over 40 000 people gathered in Oslo on Thursday to sing a song hated by Norwegian mass murderer Anders Behring Breivik.

The song in question is called Barn av regnbuen (Children of the Rainbow), based on Pete Seeger's My Rainbow Race.

The mass killer had accused the singer of Children Of The Rainbow, Lillebjoern Nilsen, of being a Marxist who sought to brainwash children.

The protest followed several days of defiant testimony from Breivik, who has admitted killing 77 people but denied criminal guilt, claiming his acts of terror were "necessary."

Thousands more Norwegians held similar musical protests in towns across the country, The Guardian informs. The protest came as survivors lined up inside the courtroom to take the witness stand and describe the bombing.