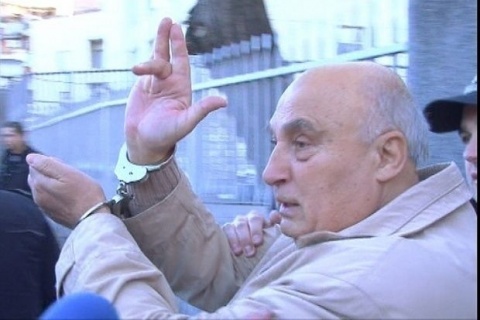 The Asenovgrad Regional Court will hear the case against Roma clan leader Kiril Rashkov, aka Tsar Kiro, on hooliganism charges.

Following a court sitting during which the magistrates refused to change Rashkov's remand measure to a lighter one, he flicked the finger at the crowd that had gathered in front of the building.

The gesture was witnessed by journalists and court guards and was caught on security cameras.

The prosecutor's office in the southern town of Asenovgrad initiated a self-referral.

Rashkov faces charges of obscene behavior and petty hooliganism that may bring him a penalty of up to two years in prison or probation.

The case will be heard under fast-track procedure.

The Asenovgrad Regional Court sentenced Rashkov to three and a half years of imprisonment for issuing a death threat against Veselin Hristov and Ivanka Petrova, residents of the southern Bulgarian village of Katunitsa.

The threats were made hours before 19-year-old Angel Petrov got ran over by a minivan driven by a man linked to the Roma clan leader.

The accident heightened ethnic tensions and triggered massive protests in Katunitsa and in a number of other big cities in the country.

On April 19, the Plovdiv District Court upheld the verdict of the court of first sentence.