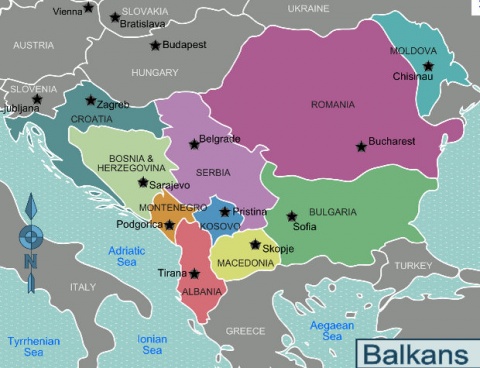 Bulgaria, Macedonia, Moldova, and Romania among the other Balkan states. Map from wikitravel.org

Romania has far surpassed Bulgaria in the number of people that it naturalizes from the respective country that is its historically and ethnically closest neighbor.

Over 220 000 Moldovans have been granted Romanian citizenship in the two decades since the Soviet collapse, the Moldovanews online portal reported on Tuesday, quoting a survey by the Open Society Foundation.

A total of 226 507 Moldovan residents were issued Romanian passports in the period between 1991 and 2011, the survey authors calculated in an article published Tuesday.

The figure may increase by 60 000 to 80 000 in the near future, they said. Moldova has a population of about 3.5 million, of those some 2.6 millions are ethnic Moldavians.

Both youngest EU member states Bulgaria and Romania have made it clear that they are using naturalization as a means of integrating closer with the population of neighboring states that once were considered part of their respective nations.

The frontrunner of the Bulgarian initiative to naturalize Slavic Macedonians was the former Minister for Bulgarians Abroad, Bozhidar Dimitrov, who later resigned, but a record number of citizenship applications were approved in 2010 under his leadership – nearly 15 000 compared to 9 000 in 2009 and 7 113 in 2008 with the trend continuing in 2011 and 2012.

Romania's policy of naturalizing Moldavians who see themselves as ethnic Romanians has been similar to Bulgaria's policy with respect to the Slavic Macedonians but apparently has become greater in scope.

In line with Romanian laws, those who lived in the territory of today's Republic of Moldova before 1940, as well as their descendants, are eligible to apply for Romanian citizenship while maintaining their original passports, RIA Novosti points out.

The Russian news agency notes that the Romanian government's policy of granting passports to Moldovan nationals has been criticized by opponents of the two countries' reunification.

The movement began in both countries following the 1989 Romanian Revolution, and Romanian President Traian Basescu has been among its supporters. He said in 2010 the two countries may unite within the next 25 years.

Nicolae Timofti, the newly elected Moldovan president, said before his election last year the European orientation "has been the policy of Moldova in recent years and this is the policy that must continue."

The Russian news agency RIA Novosti publishes a brief historical account, noting that the territory of modern Moldova covers most of the historical region of Bessarabia, which was annexed by the Russian Empire in 1812. During the 1917 Russian Revolution, a newly formed Parliament declared Bessarabia's autonomy inside a Russian state. In 1918, after the Romanian army entered Bessarabia, the makeshift parliament declared its independence, but then promptly reviewed its position in favor of unification with Romania.

Thus, between 1918 and 1945, today's Moldova was part of "Greater Romania", which emerged as a victor from World War I, to lose Moldova only after World War II. In comparison, Bulgaria failed unsuccessfully to achieve its unification with its population in most of the historical and geographic region of Macedonia, which was part of Bulgaria only during the wartime periods – 1915-1918, and 1941-1944.

In both cases, it remains unclear how many of the "new" Bulgarians and Romanians from Macedonia and Moldova sought the respective citizenship out of national consciousness, or as a rational choice since after their EU accession in 2007, the citizenship granted by Bulgaria and Romania allow their citizens to travel and work in the EU.

Interestingly, Bulgaria has also naturalized a large number of citizens of Moldova but those come from the historic ethnic Bulgarian community there which numbers between 65 000 and 200 000 people, according to various estimates; it is descended from Bulgarians from Bulgaria proper who fled the atrocities in the Ottoman Turkish Empire in the 19th, and settled in the Bessarabia region of the then Russian Empire. Thus, between 2002 and 2011, Bulgaria granted citizenship to almost 19 000 ethnic Bulgarians from Moldova.