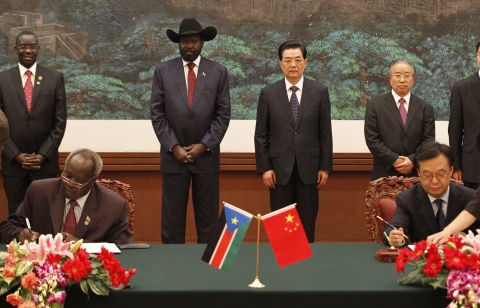 Sudan has staged continued aerial bombardment of South Sudan on Tuesday, dropping eight bombs overnight, an official said, as South Sudan's president said the attacks amounted to a declaration of war by Sudan.

South Sudan's military spokesman Col. Philip Aguer said, as cited by The Time magazine, that Sudanese Antonovs dropped eight bombs overnight between 11 p.m. and 1 a.m. in Panakuac, where he said ground fighting had been ongoing since Sunday.

Aguer said he has not received information on whether there were casualties from the attack because of poor communications.

On Monday, Sudanese warplanes bombed a market and an oil field in South Sudan, killing at least two people after Sudanese ground forces had reportedly crossed into South Sudan with tanks and artillery.

South Sudan's President Salva Kiir on Tuesday during a visit to Beijing told China's president that attacks by rival Sudan amount to a declaration of war on his country.

There has yet to be a formal declaration of war by either of the Sudans, and Kiir's remark, made during talks with President Hu Jintao, signals a ratcheting up of rhetoric between the rival nations which have been teetering on the brink of war, The Time points out.

South Sudan broke away from its neighbor and became independent last year. The two countries have been unable to resolve disputes over sharing oil revenue and determining a border. Talks broke down this month after attacks started between the two countries with South Sudan invading the oil-rich border town of Heglig, which Sudan claims it controls.

Following international pressure, South Sudan announced that it has withdrawn all its troops from Heglig but Sudan claimed its troops forced them out.

Sudanese President Omar al-Bashir has vowed to press ahead with his military campaign until all southern troops or affiliated forces are chased out of the north.

In a fiery speech to a rally Friday, after he declared the liberation of Heglig, al-Bashir said there will be no negotiations with the "poisonous insects" the Sudan People's Liberation Movement. At the time he also said, he would never allow South Sudanese oil to pass through Sudan "even if they give us half the proceeds."

Kiir on Tuesday told Hu that he came to China because of the "great relationship" South Sudan has with China, calling it one of his country's "economic and strategic partners."

The Time stresses that China's energy needs make it deeply vested in the future of the two Sudans, and Beijing is uniquely positioned to exert influence in the conflict given its deep trade ties to the resource-rich south and decades-long diplomatic ties with Sudan's government in the north. Like others in the international community, China has repeatedly urged the two sides to return to negotiations.