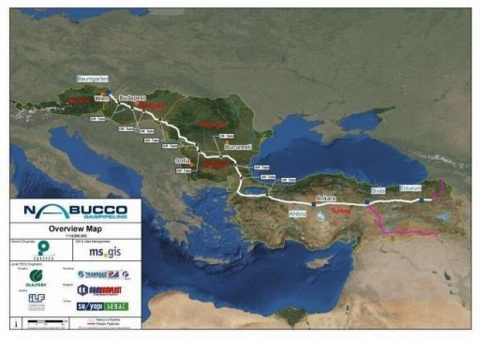 Hungary is a key country along the Nabucco route. Map by Nabucco Consortium

The Nabucco Consortium has no indication to believe that Hungary and its energy company MOL will quit the Nabucco gas transit pipeline project, the Consortium said in a special statement.

The statement of the Vienna-based Nabucco Gas Pipeline International GmbH came after earlier on Tuesday.

Hungarian Prime Minister Viktor Orban was quoted by international media as breaking the surprising news that MOL is quitting Nabucco.

"The Nabucco Pipeline project is based on a treaty that was signed and ratified by the transit countries, including Hungary. The Intergovernmental Treaty establishes a unique and strong legal framework for lenders, producers and transportation customers. The Nabucco shareholder in Hungary is FGSZ, a MOL subsidiary, and we have not had any indication that this will change," the Nabucco Consortium declared Tuesday afternoon.

What is more, in addition to refuting the news about MOL's quitting, the Consortium sought to make it clear that the project for the natural gas pipeline from Asia to Europe is making steady progress.

"The project is seeing strong progress. The Project Support Agreements were signed by all transit countries in June 2011, thus finalizing the legal framework for the pipeline. In Hungary, three out of the four environmental permits have been granted," the Vienna-based company said.

The Consortium reminds that Nabucco was granted a national project status in Bulgaria and in Turkey in the past few months.

It further announced that The Front End Engineering of the entire pipeline route is 80% finalized, and revealed that the German company Bayerngas is currently negotiating with the Nabucco consortium to become the 7th shareholder.

"I'm not an expert on the details, but what I have seen is that even the Hungarian company, Mol, is leaving the whole project," Orban has told reporters in Brussels, as cited by Bloomberg. He stated that the project is "in trouble."

Nabucco was initially set to carry up to 31 billion cubic meters of natural gas per year from the Caspian region to Europe. It was expected to relieve Europe's dependence on Russian gas supplies.

On Monday, the Hungarian PM also observed that Russia-backed South Stream gas pipeline project which would run through Hungary was gaining momentum.