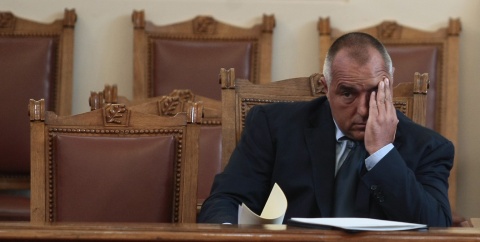 Bulgaria's Parliament will discuss whether there are legal grounds for a no-confidence vote against the cabinet headed by PM Boyko Borisov (pictured). Photo by BGNES

Bulgaria's Parliament will hold a sitting on Monday on which a recently submitted no-confidence motion against ruling centrist-right GERB is scheduled to be discussed.

Last week, far-right Ataka's parliamentary group decided to withdraw its support from the no-confidence vote, leaving only 39 lawmakers from left-wing Bulgarian Socialist Party and one "independent" MP behind it.

The bare minimum for a no-confidence motion is 48 signatures (20% of all MPs), according to the Bulgarian constitution.

However, legal experts have argued that there is no such thing as "withdrawal of signatures" under Bulgaria's legislation.

The no-confidence motion was submitted by Ataka and left-wing Bulgarian Socialist Party (BSP) on April 6 over what the two parties perceive as GERB's failed energy policy. At the end of March, the GERB government decided to scrap the Belene Nuclear Power Plant, a project backed by the two aforementioned parties.

Save for BSP, no other formations would vote against the government. There are a total of 240 MPs in the Bulgarian parliament.