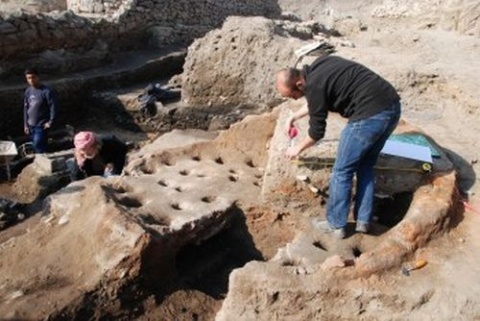 Pictured: The archaeological excavations in Bulgaria's Sozopol. Photo from Burgasutre.bg

The vase was found on Sunday during digs which first started in October 2011, and target the fortress wall of what once was one of the largest Greek polises on the Black Sea coast, and the ruins of the St. Nikolas of Myra monastery.

"Such scenes are relatively rare. We have found thousands of ancient vases in Bulgaria but this is the first one of this type. I have seen similar vases in Greece. The Ancient Greeks considered sex a free gift from the gods, it was the Christian church that first proclaimed what is wrong and what is allowed in sex," he stated.

"It was the church that imposed total bans, with the exception of one pose called missionary for a reason; anything else was banned, and considered perverted. For better or worse, the Ancient Greeks did not see it that way," Dimitrov added.

Bulgaria's National History Museum did not release official photos of the new find near Sozopol on Sunday.