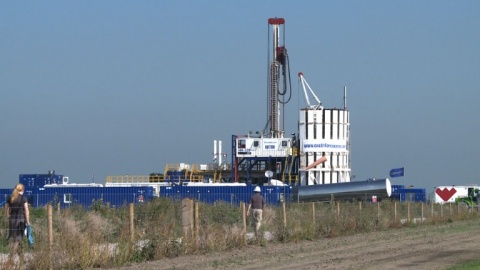 The energy firm Cuadrilla Resources says there could be as much as 200 trillion cubic feet (5.6 trillion cubic metres) of natural gas contained in shale rock deep below ground in the area around Blackpool in the UK. Photo from EPA/BGNES

The UK government has backed the exploration of shale gas using the controversial hydrofracking technology, which has been banned by France and Bulgaria.

The British Cabinet gave a green light to hydrofracking a year after it temporarily banned the drilling method which triggered two earthquakes in Britain.

An expert report commissioned by the UK government said shale gas fracking, a process where pressurised water and chemicals are pumped underground to open shale rocks and release trapped gas, was safe to resume with tighter rules on seismic monitoring and drilling surveys.

"The risk of seismic activity associated with hydraulic fracking operations is small and the probability of damage is extremely small - we suggest fracking can continue under our recommendations," one of the report's authors, the British Geological Society's Brian Baptie, said at a briefing, as cited by the Canada Free Press.

The British energy ministry is inviting public comment on the report's findings over the next six weeks, after which it will issue its final ruling on the future of UK shale gas exploration.

The experts published their findings after reviewing a series of post-earthquake studies published by Cuadrilla Resources, a UK firm which was forced to halt its shale gas operations near Blackpool in northwest England after fracking triggered small earthquakes in May 2011.

They also recommended the use of a "traffic light" control system, where operations are suspended if a red light indicates seismic activity at a threshold of 0.5 or above, well below a level which could cause structural damage on the surface. The tremors measured near Blackpool last year reached a level of around 2 .

While the report agreed with Cuadrilla's investigations as a whole, it said there was not enough data to confirm the company's claim that it was unlikely similar earthquakes would reoccur.

Activists on both sides of the Atlantic have lobbied politicians to ban fracking on environmental concerns, including the dangers of pollution of ground water and leakage of gas into the atmosphere.

France, which has some of Europe's largest shale gas reserves, last year banned the use of fracking on worries about environmental damage.

In the UK, Cuadrilla has said its site near Blackpool had 200 trillion cubic feet of gas in place - enough to cover UK demand for generations, although experts have cast doubt on the claims.