Mass Murderer Breivik: I Would Do It Again! 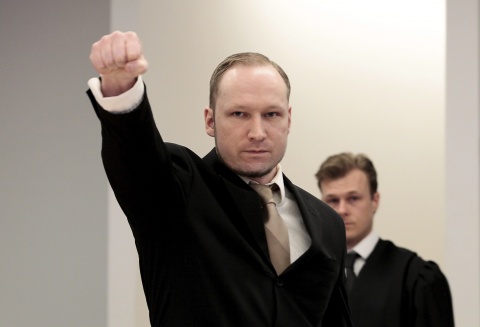 Terror- and murder charged Anders Behring Breivik makes his salute as he arrives in courtroom 250 in the courthouse in Oslo early 17 April 2012. EPA/BGNES

Norwegian mass murderer Anders Behring Breivik has declared he feels no remorse for his actions and that "he would do it again."

The murder and terror suspect began his testimony on Tuesday, the second day of his trial. He began by reading out a written statement, but the presiding judge said he should be prepared to be interrupted and not speak for longer than 30 minutes.

In his statement on Tuesday, Breivik compared the Labor Party's youth movement to Hitler-Jugend.

He started his speech by reminding that journalists have been insulting him by calling him "a child murderer, a homo and one who has an IQ of 80."

The mass murderer's claims came after a citizen judge was dismissed Tuesday for his comments online the day following the July 22 attack that Breivik deserves the death penalty. Lawyers on all sides had requested that lay judge Thomas Indreboe be taken off the trial, according to international media.

In a report released this month, two court-appointed psychiatric experts said Breivik was sane at the time of the killings.