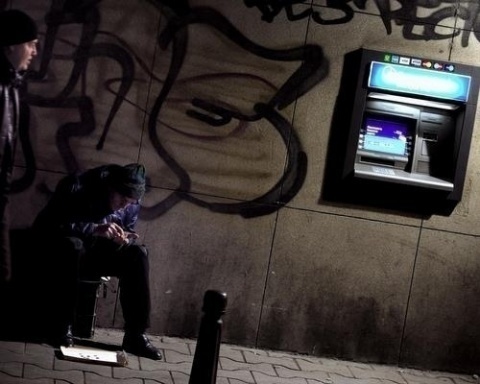 A beggar man counts his coins in front of a cash machine in Sofia, Bulgaria. The country has so far managed to weather the global crisis without foreign aid. Photo by EPA/BGNES

Bulgaria's economy hovers on the brink of its second recession in three years in the wake of the slump in the euro zone, a Sofia-based think-tank has warned.

"It is high time that the Bulgarian government presented updated forecasts for the economy's growth this year and start taking measures to adapt the state budget to the all so realistic recession scenario," Dessislava Nikolova from IME wrote.

Economists say the most troubling indicator is that in the period January -February 2012, the total value of the exported goods reached almost BGN 5.7 B, down by 6.1% on an annual basis.

Bulgarian exports to third countries also decreased, marking a 2.6%  fall compared to the corresponding period of the previous year and amounted to BGN 2.3 B.

Data on the visits of foreign tourists in February did not bring the expected joy either. The number of foreign travelers here was down by about 3% on an annual basis after a year and a half of healthy growth. The figures dampened the sector's hopes that the excellent conditions for skiing in February will attract many foreign tourists.

Earlier this month Bulgarian analysts and institutions unanimously cut their growth forecast for 2012 to just below 1.5% instead of the previously forecast 2-3%, citing slumping exports and stagnant domestic demand.

Growth slowed down to 1.6% in the fourth quarter of last year, curbed by slumping exports, according to data of the statistics institute.

The European Union newcomer entered recession for the first time in the first quarter of 2009 with its economy shrinking 5% from January to March 2009 and contracting 1.6% in the fourth quarter 2008 on a quarterly basis.

In the first quarter of 2009 Bulgaria's GDP marked a 3,5%  drop on an annual basis for the first time since the financial and economic crisis in 1997 and the slump was much sharper than macroeconomists' forecasts.