Christian Extremist Breivik Moved to Tears by Own Video 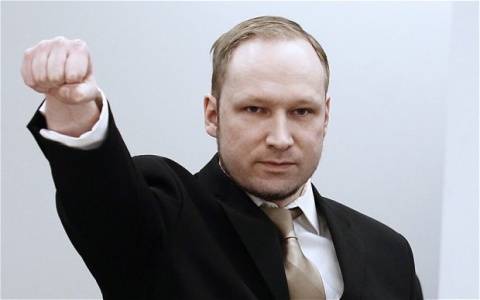 Upon appearing to court Monday, Breivik made a nazi-like salute. Photo by EPA/BGNES

When the court showed his propaganda video, which he posted on the internet just before Breivik embarked on his terrorist attacks, the accused broke down into tears.

The 33-year-old Nowegian man is charged with the murders of 77 people, which he carried out by planting a bomb in Oslo's government center and then going on a shooting rampage in a children's camp on nearby island of Utoya, July 22, 2010.

During the first hour of the trial, prosecutor Inga Bejer Engh read out the names of all victims, during which the live transmission of the court proceedings was suspended on ethical grounds.

"I confess I committed those acts, but I do not consider myself guilty," stated Breivik, when asked by the court.

He was in high spirits and even smiled while the names and ages of his victims, many of them children and teenagers, were read out.

However, when the court proceeded to show the video, which motivates Breivik's terrorist attacks, he was moved and broke to tears, reports RIA Novosti.

In the video, the Christian rightist extremist accuses Islam and what he calls "cultural Marxism" for what he perceives the disintegration of traditional society and values in his homeland, Norway.

The court decision is expected to be delivered on the anniversary of the tragedy, July 22.