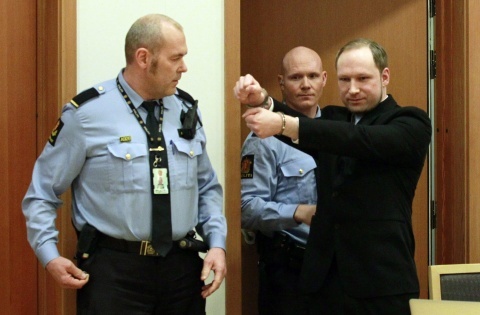 Breivik attempted another nazi-like salute upon appearing for a court hearing in Oslo Feburary 6. Photo by EPA/BGNES

The trial against Norwegian rightist Christian extremist Anders Behring Breivik for the mass murder of 77 on July 22, 2011 has started in Oslo Monday.

Upon appearing to the court, the self-confessed rightist terrorist made a Nazi-like salute by extending his right arm with a clenched fist, reports RIA Novosti.

In his first words, Breivik stated he does not recognize the Oslo District Court as legitimate to try him.

The first sitting of the trial is expected to be focused on the matter whether Breivik is sane and fit to stand in court.

Two expert opinions were delivered before the trial, with the second one claiming that the rightist extremist is completely sane and fit to be tried.

Around 100 persons will be present as witnesses during the trial - 46 witnesses and victims of the Utoya massacre, 15 witnesses of the Oslo government center bombings, and 29 witnesses for the defense.

Witnesses are expected to recount evidence for 16 days. The court decision is expected to be delivered on the anniversary of the tragedy, July 22, reports RIA Novosti.

On July 22, Breivik planted a bomb in the busy Oslo government center, killing 8 people, and then went on a shooting spree in a children's camp on nearby Utoya island, killing 69 more.

He has made full confessions of his deeds, which he says were motivated by what he has called Norway's giving up its national and Christian values for what he terms a leftist globalized policy outlook.