Brutally Killed Macedonians to Be Buried in Wake of Riots 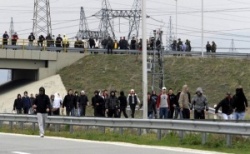 The five Macedonians who were discovered mysteriously killed Thursday near capital Skopje will be buried Saturday.

The gruesome murder provoked the simmering inter-ethnic tension between Slavic and Albanian Macedonians, with crowds walking out and rioting late Friday.

At least three personal automobiles and one public transportation vehicle in Skopje have been destroyed and people have been injured in the unrest.

Macedonian authorities have to tried to allay fears that the killings have been ethnically motivated.

The situation Saturday is reported to be tense, but peaceful.

The five bodies were found by a local fisherman Thursday near an artificial lake just north of Skopje, near the village of Smilkovci.

Tensions in Macedonia have been simmering since the end of an armed rebellion in 2001, when ethnic Albanian rebels fought Macedonian government forces for about eight months, seeking greater rights for their community. The conflict left 80 people dead, and ended with the intervention of NATO troops.

In 2011, simmering tensions flared again in ethnic clashes, including a string of street fights and hooligan behavior in Skopje and other major cities in Macedonia.