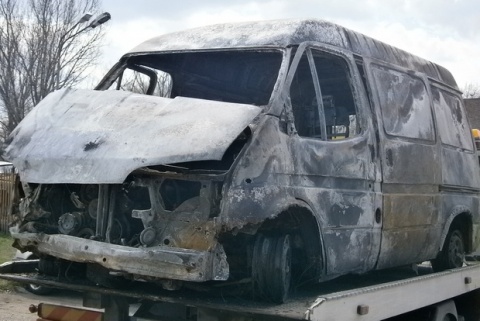 Police are looking for 4-6 suspects involved in Wednesday's armed robbery of the armored cash truck. Photo by dariknews.bg

The two security guards of the raided armored cash truck have been released after police found that they were not involved in the robbery.

The raid took place near the village of Petko Slaveykovo in central Bulgaria and was reported to the police at 7.45 p.m. via the 112 emergency hotline.

The attackers caused a deliberate head-on collision between the armored vehicle and a minivan.

The men cut the cash truck open, took as much money as they could and sped away in a number of SUVs.

According to unconfirmed reports, the robbers took around BGN 2M.

The two guards were released on Thursday, following a 20-hour police questioning, according to an announcement of Desislava Madzharova from the press office of the District Police Directorate in Gabrovo.

"The guards remained in their places although the armed men needed their help to get the money as quickly as possible, as a result of which the stolen amount was relatively small," Madzharova clarified.

She explained that the amount of money that had been transported by the vehicle would not be made public due to banking confidentiality.

Madzharova added that the ownership of the minivan driven by the attackers would also be kept secret.

The vehicle was set on fire after the robbery which further complicates the investigation.

The case is being supervised by the District Prosecutor's Office in Garbrovo.

The Ministry of Interior announced on Thursday that they were looking for four to six suspects who were most probably still armed.