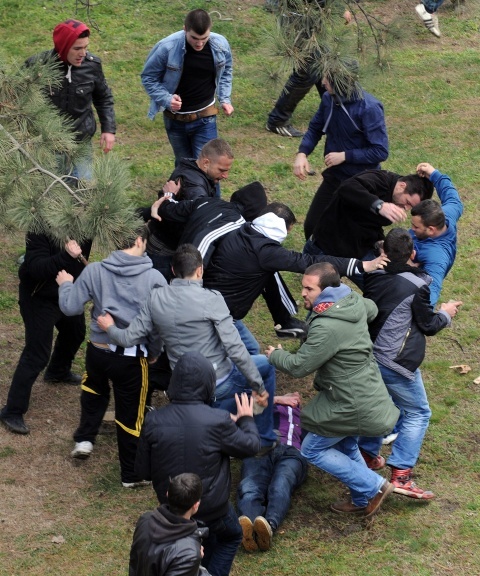 Hand to hand clashes between ethnic Albanians Macedonians at the Fortress in Skopje,The Former Yugoslav Republic of Macedonia on 13 February, 2011. EPA/BGNES

Macedonian police have tried Friday to quash speculation that the shooting deaths of five people near the capital Skopje were related to the tensions between Slavic Macedonians and ethnic Albanians.

Five bodies were found Thursday near an artificial lake just north of the capital, of Skopje. The bodies had been discovered near the village of Smilkovci by a local fisherman.

"I ask the media not to make any speculation that (the crime) is connected with interethnic issues ... There is no evidence of that," Macedonian police spokesman Ivo Kotevski said, as cited by international media.

Tensions in Macedonia have been simmering since the end of an armed rebellion in 2001, when ethnic Albanian rebels fought Macedonian government forces for about eight months, seeking greater rights for their community. The conflict left 80 people dead, and ended with the intervention of NATO troops.

Four of the victims were in their 20s, and the fifth was in his 40s, Kotevski said. Police have sealed off the area and the bodies are being examined by forensic experts. No suspects or motives for the slayings are yet known.

Macedonian riot police got deployed on a highway leading to the village as dozens of angry youths blocked the road.

There were two flare-ups of ethnic-related violence in Macedonia in 2012 so far, the last one in March, with clashes between gangs of Albanian and ethnic Macedonian youths resulting in dozens of injuries.

Ethnic Albanians, who are mostly Muslim, make up a quarter or more of Macedonia's population of 2.1 million.