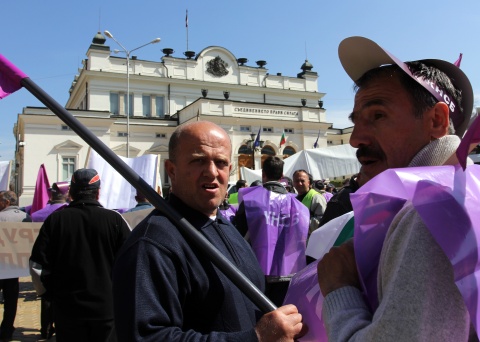 Wednesday OTzK workers protested in front of the House in Parliament, after first rallying in front of owner's Intertrust Holding headquarters in Sofia. BGNES

Wednesday Anastasov met striking workers from the Kardzhali factory, who went to capital Sofia to express their greivances, after not being paid their wages for months.

"I think that the Prosecutor's Office will have a lot of work to do if what I heard from the workers is true," commented the Buglarian Parliament vice chair.

"Zahariev owes his workers some BGN 1.2 M in wages, while at the same time they say the OTzK is heavily in debt to companies which are again owned by Zahariev," said he.

Workers at the Lead and Zinc Complex, Bulgaria's largest non-ferrous metal works, have claimed that the factory's owner has engaged in systematic draining of the enterprise, making its debts stunningly grow from BGN 30 M to BGN 400 M.

"The 600 persons working at the Complex, together with their families, form a significant part of Kardzhali's population, and thus Zahariev's conduct dooms the city to misery," commented Anastasov.

"I personally think that the state must have mechanisms in its possession to punish such owners and prevent the destruction of important sectors of Bulgaria's industry," added Atanasov.

Wednesday protesting workers called for the criminalization of failure to pay wages and for legislative amendments making employees with unpaid salaries legal creditors of the company.

They said they fear Zahariev might file for bankrupcy of the OTzK, thus in effect impeding an eventual payment of his dues in salaries.

In recent attempts by Bulgarian cabinet members to pressure Zahariev on the matter of workers' wages, they had said they had little levers to exert influence, as the enterprise is privately owned.

In recent months, controversial businessman Valentin Zahariev was involved in another labour scandal, when workers at the Gorubso metal mines in Madan on their turn protested for heavily delayed wages.

In that case, the Bulgarian government, which owns the mines, annulled its concession to Zahariev, granting the enterprise rights to a company owned by businessman Nikolay Valkanov.

Some have already criticized the move, saying that it only shifts responsibility from one shady businessman to another.

Regarding the Lead and Zinc Complex in Kardzhali, there is also information that Zahariev might opt to sell it, and that potential investors have already expressed interest in buying it.