Diplomats Set for 2nd Edition of Bulgarian Business Tour in US 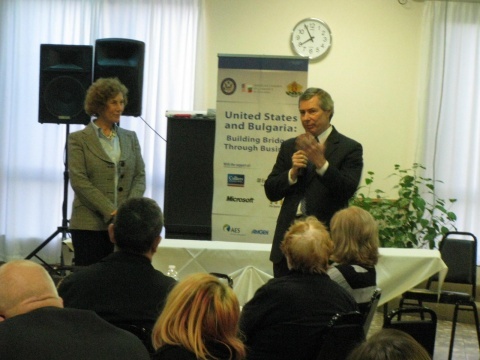 Ambassadors Warlick and Poptodorova at a meeting with the Bulgarian Community at St. Sophia Church in Chicago during their 2011 US tour. Photo by Simeon Gasparov for Eurochicago

The Bulgarian Ambassador to the US, Elena Poptodorova and the US Ambassador in Sofia, James Warlick, will repeat in May their diplomatic tour across the US in an effort to attract American investors to Bulgaria.

The news was reported by the American diplomat during his visit at the Maritsa Iztok mines in southern Bulgaria.

In 2011, the Ambassadors visited Chicago, Houston, Phoenix, and San Francisco.

During the visit, Warlick stated that he would advise US companies to invest in many sectors in Bulgaria, including the energy one and praised the hosts from the Maritsa Iztok complex for their good work.

The diplomat stressed that the balance between nuclear, conventional, and green energy must be found through an open dialogue while taking into account diversification of sources. The mines and the thermal power plants of Maritsa Iztok, two of which are American-owned, must be part of the above mix, according to him.

Warlick was invited there by the President of the Confederation of Independent and Free Syndicates in Bulgaria, KNSB, Plamen Dimitrov. The two toured the mines to observe the coal mining process and to meet with workers, the management and the trade unions. The latter said they saw the visit as a guarantee that the management will fulfill commitments included in the agreement signed after the February strike at Maritsa Iztok.

Some of the pending ones include hiring only 12 people since February while there are 85 job openings, failure to increase wages by 5% for the second quarter as promised, and unresolved work safety issues.

KNSB bestowed the Ambassador with a medal dedicated to the 100th anniversary of the Miners Union for his compassion to the problems of Bulgaria's mining sector. The management invited Warlick to come back in August to celebrate with them their professional day.